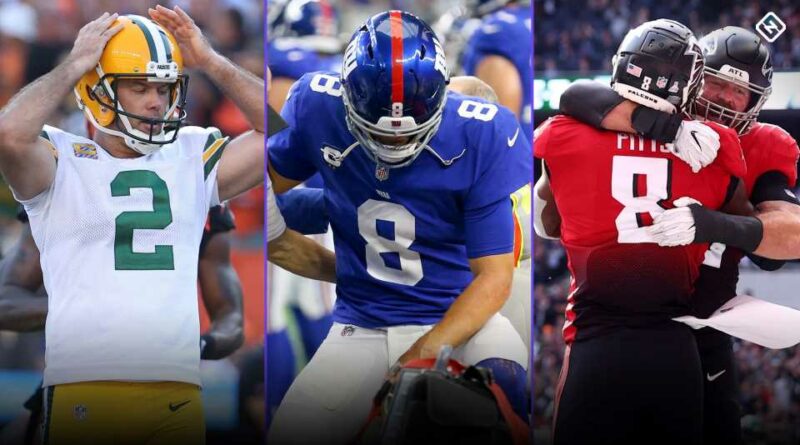 And now, a tale of two teams trending in opposite directions.

The NFC East “race” — a term used loosely — is shaping up to be a one-horse race, with the Cowboys rushing on, over and through the Giants in a 44-20 win over their division rival on Sunday.

It’s fitting that Halloween is approaching, because Ezekiel Elliott was a pure horror movie for the Giants defense today: Elliott picked up 110 yards on the ground and a touchdown, with Tony Pollard adding 75 rushing yards of his own. This comes roughly a month after Elliott’s touches were scrutinized by analysts and fans alike.

While the score was wide, the game was a little bit closer than you’d believe: The Giants suffered through losses of quarterback Daniel Jones, running back Saquon Barkley and wide receiver Kenny Golladay in the matchup, certainly dousing any hopes of an outside shot at the playoffs in the dumpster — and all before Halloween, too.

Dallas is firmly in the saddle for the NFC East, and they should get comfortable in that spot. Now sitting at 4-1, the ‘Boys travel to face the Patriots in Week 6 before heading to their Bye Week. The Eagles and Washington, both sitting at 2-3, are in second. The hapless Giants both sit in the cellar of the division.

All this to say: The Cowboys should (should) cruise to an easy NFC East crown.

Stranger things have happened in the NFL. It is spooky season, after all.

The United Kingdom has probably never seen anything like the 6-6 Pitts — and there were questions this year to whether or not Matt Ryan had just seen Pitts this year. That question was answered on Sunday.

With the Falcons without starting wide receivers Calvin Ridley and Russell Gage for Sunday’s London matchup vs. the Jets, Pitts was poised to have a breakout game, and break out he did: Pitts snagged nine passes for 119 yards and a touchdown in the 27-17 drubbing.

Unfortunately, the Giants are leaving Dallas with four losses in total: One game, and three players.

Saquon Barkley’s ankle ballooned to the size of a very muscular pumpkin after stepping on a defender and rolling his ankle. He was reportedly seen on crutches and a walking boot following the game, and is said to be nursing an ankle sprain.

Daniel Jones was carted off after taking a nasty hit on a goal-line scramble, and in a scary moment, was hobbled on his feet. Kenny Golladay exited the game with a knee injury, playing a half of ball.

The Giants were already without wideouts Darius Slayton and Sterling Shepard, and they hung in there with the Cowboys in the first half until the injuries started rolling in and Dallas started pulling away. It’s hard to see when it’ll get better for the 1-4 Giants, but the answer is probably, “Not very soon.”

The Packers kicker entered Sunday’s game with a streak of 28 consecutive made field goals. He had an opportunity to extend that late in the fourth quarter and give the Packers a win — but he missed the kick with 2:16 left on the clock. Crosby had another opportunity to make a kick with time expiring, and missed the uprights again.

Then, in overtime, Crosby had an opportunity to nail down the win with a 40-yarder. No big deal, right? Wrong. Another pull.

In all, Crosby missed three kicks before nailing down the game-winner in overtime to give the Packers a cardiac victory over the Bengals in Cincinnati. No harm, no foul. Way to get in the winner’s column, Mason.

When the Seahawks signed Jamal Adams to the massive contract extension this offseason, they expected him to be more of a game-wrecker than getting wrecked in games.

Through five games, Pro Football Focus has Adams graded out as a 53.7 in coverage, which is, shall we say, less-than good. That makes for the second-worst mark of his career to this point, with last year’s 52.5 coverage grade just edging out this year’s grade.

While Adams has made his bones as a pass rusher, too, he has not been credited with a sack, pressure or QB hit so far in 2021.

With Russell Wilson out the next four-to-eight weeks while he recovers from a finger injury, the Seahawks defense is going to have to put in extra work to try and help with the potential drop-off between Wilson and Geno Smith. While all of it doesn’t fall on Adams, their big-money safety is going to have to start to produce, whether that’s in coverage or as a pass rusher.

Justin Fields’ solid last two starts have cooled Matt Nagy’s hot seat, with the Bears upending the Lions and the Raiders, setting their record to 3-2 on the season.

There’s a long, long way to go for Fields, Nagy and the Bears in 2021, but remember: They did make the playoffs with Mitchell Trubisky last year.

Fields has upside that Trubisky and former QB1 Andy Dalton obviously never had, and while Nagy hasn’t done much to help accentuate Fields’ unique abilities, the rookie QB is making it work early on. That bodes very well for Nagy to this point in the season — unless things go sideways for Fields as the season wears on.

No head coach needed a win more in Week 5 than Urban Meyer, for reasons that are well documented at this point.

Meyer likely isn’t going to be relieved of his coaching duties midseason unless something really, really goes wrong, but so far, the Meyer-led Jags have looked largely non-competitive aside from a last-second loss to the Bengals in Week 4. Meyer and Trevor Lawrence aren’t particularly used to losing like this, after all.

Once owner Shad Khan said that Meyer has to “regain his trust,” in a very public statement, the clock started ticking on the Meyer tenure in Jacksonville. If the losses keep piling up, it’ll probably get more and more difficult for Khan and the rest of Jacksonville’s braintrust to look the other way.

The Saints are all aboard the rollercoaster known as “The Jameis Winston Experience,” and they got the full run of it on Sunday.

Winston finished 15-of-30 passing for 279 yards, four touchdowns and an interception in the Saints’ 33-22 win over the Washington Football Team, including a really wild Hail Mary at the end of the half, a 72-yard touchdown strike and an opening-drive interception.

The Saints did it without starting offensive left tackle Terron Armstead and center Erik McCoy once again; McCoy hasn’t played since Week 1, with Armstead not playing since Week 3. They’re also awaiting the return of Michael Thomas, who should be good to go at the end of October.

With a 3-2 record entering the Bye Week, the Saints are embracing the post Drew Brees era pretty impressively so far.

To our friends overseas: On behalf of all football fans, we apologize that we sent the Jets over. This just isn’t who we are as allies. We’ll do better next time around.

*Takes a peek at Week 6 schedule.*

Which Patriots Super Bowl team is the best of the Bill Belichick-Tom Brady era?