The NFL's group of unblemished teams is down to an elite quartet.

After five weeks, the Green Bay Packers, Seattle Seahawks, Pittsburgh Steelers and Tennessee Titans are the last remaining outfits yet to be dealt a defeat this season. But the road for all of them is about to get significantly more difficult, with the Steelers facing the 4-1 Cleveland Browns on Sunday and the Packers take on Tom Brady and the Tampa Bay Buccaneers. Even if all of the groups remain perfect through this week (the Seahawks are on a bye), there's guaranteed to only be one AFC unbeaten team left standing after Week 7, when the Titans host the Steelers.

With that in mind, we asked NFL reporters and columnists from USA TODAY Sports: Who will be the last unbeaten NFL team standing in the regular season?

Green Bay. I like the chances for a team that has put up at least 30 points in each game. If the Packers get out of Tampa on Sunday with a victory, their next four opponents – Houston, Minnesota, San Francisco and Jacksonville — have a combined record of 5-15. This team could not only take a 9-0 record into a late-November game at Indianapolis, but along the way can get some symbolic revenge by showing that they can indeed beat the 49ers in Santa Clara while touring the landscape of 2019 playoff teams suffering through hard times. Balance is the ticket. Surely, Aaron Rodgers is on fire, rolling back the clock to his NFL MVP season in 2011. Yet the supporting cast has been on point, too. This includes Za’Darius Smith, the edge rusher that every team needs. And the Packers still haven’t committed a turnover.  How about a bonus question: If not the Pack? Seahawks mojo. Seattle is the only team to win five games – despite nearly losing to the Patriots, Cowboys and Vikings, and getting a whale of a scare from the Dolphins. The defense keeps them in games, and Russell Wilson wins ‘em. That’s a risky combination. But so far, it’s worked. Then again, maybe the Seahawks are just living right.

No particularly strong feeling here … so given I’ve got Packers perched atop USA TODAY Sports’ NFL power rankings, may as well stick with them. Sunday’s game at Tampa Bay is hardly a given, but I think Aaron Rodgers and Co. get it done coming off a bye week. After that? It’s Texans, Vikings, Niners and Jags for the Pack – a stretch that seems pretty conducive to a 9-0 start. And when you consider the Titans and Steelers – neither has played a particularly impressive schedule to date – meet in Week 7, while the by-the-skin-of-their-beaks Seahawks are about to run into the Cardinals (twice), Bills and Rams? #GoPackGo seems like the most likely group to make an extended run at perfect.

To state the obvious: The Seahawks, on a bye week this week, are statistically most likely to be the last team undefeated on Monday. But I expect the Titans to beat a 1-4 Texans team, the Steelers to drop Cleveland to 17 straight losses in Pittsburgh, and Aaron Rodgers to win the not-yet-washed battle with Tom Brady in Tampa Bay. That moves us to Week 7, when the Steelers and Titans face off and aren’t both emerging with a win. Seattle’s traveling to Arizona, whom I anticipate will be riding momentum from a win at JerryWorld on national television. Kyler’s mojo from a hometown return will be just enough to edge a Seattle team getting back into its groove after 14 days off. Meanwhile, Green Bay will host a Texans squad that will flash but won’t keep pace with Rodgers’ explosiveness. All of which is a roundabout way to say: Give me Green Bay.

I really think it's the Packers. When you look at their schedule, the upcoming slate features the Bucs (3-2), the Texans (1-4), Vikings (1-4) and 49ers (2-3). They definitely have a chance to win the next three, and possibly the fourth. Depending on San Francisco's health, that could wind up being their most challenging matchup of the four because the Niners coaches have such a good understanding of Green Bay's schemes. The Seahawks have some divisional games coming up, and they will be challenging. The Titans and Steelers play each other in a couple of weeks, so one of them will fall from the ranks. But Green Bay's level of play, plus the way the schedule shakes out seems to best suit them for a long unbeaten stretch.

I’m going to go with the Packers. For some reason, they seem to be underrated this season. And if there’s one thing I’ve learned about Aaron Rodgers, much like with many of the most competitive athletes out there, a little motivation to silence the haters goes a long way. As Davante Adams returns to health, the offense will be even better. The defense does have a few concerns, but this is more about remaining schedule. The toughest remaining opponents are the Buccaneers (this weekend) and the Titans (Week 16). As long as the Packers take care of Tampa Bay on Sunday, they should be able to cruise until their matchup against Tennessee. And while the Bears are 4-1 and Green Bay faces them twice, I just don’t have as much confidence in Chicago being a legitimate threat in the conference. 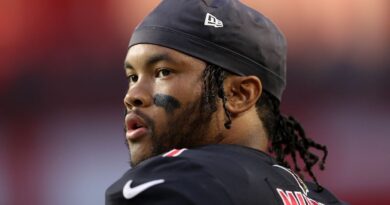 Cards’ Murray: ‘Nonsense is not what I’m about’