Hindsight is almost always 20/20, but in the case of the Jacksonville Jaguars and their nightmare quarterback situation, everyone saw this coming: we even spun up a post pointing to the Jags as one of the top teams that should trade for Teddy Bridgewater. As we hear it, the Jaguars scoffed at the notion. After all, they have Blake Bortles on their roster.

Things have not gone as planned for Jacksonville since the start of the season, though, with injuries and poor play at the quarterback position culminating in Bortles being benched at halftime of the Jags loss to the Texans for Cody Kessler. Bortles will start again this week and there is good reason to believe Sir Blake can lead the Jaguars to a victory over the Eagles across the pond.

But any performance by Bortles is just like any players-only meeting — as predicted by yours truly on Sunday! — in that it’s a short-term solution to a long-term problem.

The Jaguars believed their defense and run game could make up for any deficiencies at the quarterback position. I get it. It’s a viable theory and they executed the steps pretty well this offseason, picking up road grader Andrew Norwell to bolster the ground game. A few problems exist here though.

One, defense is never as consistent as offense on a year-to-year basis. And two, the Jaguars were VERY lucky with injuries last season. They missed less than 10 games from their starting defense over the full season. That is very good/lucky. By comparison, they’ve gotten 19 carries from Leonard Fournette alone. That is very bad/unlucky.

Part of me wants to believe the Jags are slow playing it with Fournette’s injury, hoping the 2017 first-round pick, taken No. 4 overall, can fully recover from a hamstring injury and they can unleash him down the stretch. But the addition of Carlos Hyde via a trade last Friday with the Browns could certainly be a red flag for Fournette, although maybe the Jags just want a ground/pounder for the next few weeks and as insurance for their star feature back down the stretch.

Which sort of leads me to a similar point I echoed last week in this spot: the Jaguars don’t have to be in this position. Fournette was a huge addition for them last year, a physical pounder who banged out yards between the tackles. But imagine a scenario in which the Jags decide to use the No. 4 draft pick on Deshuan Watson instead of Fournette, and then find a running back later in the draft.

This is also not hindsight, because there was legitimate buzz about Tom Coughlin being a huge fan of Watson, even stemming from our own Pete Prisco, who knows this team well.

Let’s do a quick exercise in opportunity cost while we’re here and look at the next running back taken after each of the Jaguars subsequent picks in this draft.

At No. 34, the Jaguars drafted Cam Robinson. Dalvin Cook (No. 41) and Joe Mixon (No. 48) were the next running backs taken. Admittedly, neither has been outstanding and Mixon had major red flags. Alvin Kamara (No. 67) went one pick before the Jags next selection (No. 68) while Kareem Hunt (No. 86) was the next running back off the board after their third round pick. Both guys have been superb. James Conner (No. 105) was also taken in the third round. Following the Jaguars fourth-round pick (No. 110), Samaje Perine (No. 114) and Tarik Cohen (No. 119) came off the board. One bad miss, one potential hit, although Cohen isn’t the type of feature back you necessarily want in this Jags system.

The point being that Jacksonville could have gone in a different direction with their top pick, taken a quarterback to challenge Bortles and ended up gambling on a running back later in the draft. Or, you know, just signed Carlos Hyde in free agency.

Jacksonville has a Super Bowl-caliber defense with a window to win a title that at least one player on the roster — Jalen Ramsey — has acknowledged is small. That same player has also acknowledged the defense is playing pretty poorly this year, find the lie.

They built out a stout running game with some interesting receiving weapons. And they stuck with Bortles even though most of the evidence told them he might not be able to carry a team for large stretches. They passed in the draft (Watson), they passed in free agency and they passed when a potential “break glass in case of emergency” option like Bridgewater came available on the trade market.

And the decision might ultimately cost them another chance at a deep run in the playoffs if the offense can’t carry this team for a few weeks while the defense gets things sorted out.

To the weekly quarterback rankings.

Yell at me on Twitter @WillBrinson with your complaints, questions and (unlikely) compliments and make sure to check out my daily NFL podcast, the Pick Six Podcast, which you can subscribe to on iTunes here. 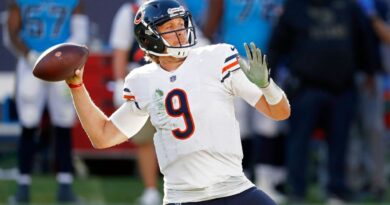 What channel is Cincinnati vs. Tulsa on today? Time, TV schedule for 2020 American championship game