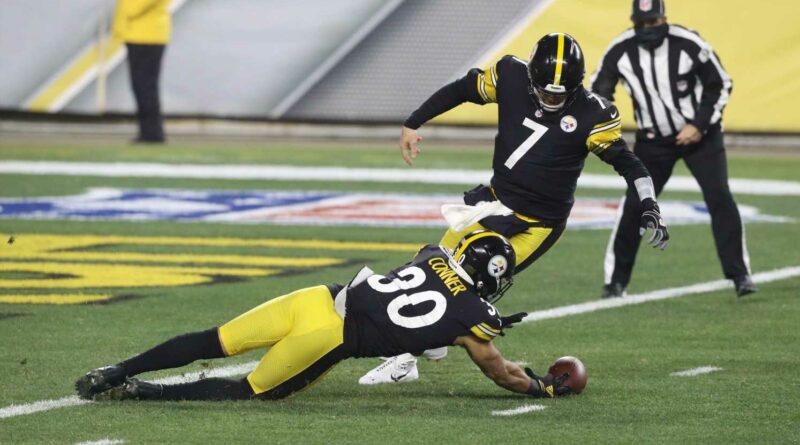 The first weekend of NFL playoff football is in the books with six games of the wild card round wrapped up.

The Kansas City Chiefs in the AFC and the Green Bay Packers in the NFC enjoyed first-round byes and will be making their debuts next weekend. But the big winners on Sunday were the Baltimore Ravens, New Orleans Saints and Cleveland Browns, all of whom won their respective wild-card games and moved onto the divisional round.

It sets up what should be a thrilling slate in which the jewel might be the third matchup of the season between the Saints' Drew Brees and Buccaneers' Tom Brady.

But before we dive into the divisional round, here are the winners and losers of Sunday's action from the wild card round.

That Cleveland won its first playoff game since 1994, this one 48-37 against the division-rival Steelers, is remarkable enough. But that the team did it short-handed and without its head coach and offensive line coach is practically stunning. You can fault the Browns, perhaps, for getting a little too conservative on defense and not running the ball enough after building a massive lead, but they played clean football, committing just three penalties and recording a plus-5 edge in the turnover battle.

NICK CHUBB TO THE HOUSE 💪 @NickChubb21#WeWantMore#SuperWildCard

Credit quarterback Baker Mayfield (263 passing yards and three touchdowns) for making the smart and effective decisions with his passes. But credit the Browns' coaching staff, with head coach Kevin Stefanski watching from home, for scheming up quick throws that got the ball out of Mayfield's hands so quickly that it just erased a normally ferocious Steelers pass rush, a group that didn't register a single sack. Kudos to Cleveland, which looks like it could be a regular presence in the postseason and for taking down a rival in the process.

The Saints offense without the checkdown to Kamara

One of the major criticisms of New Orleans' offense, aside from coach Sean Payton arguably turning to gadget plays and Taysom Hill too often in the end zone, is that quarterback Drew Brees relies too much on checkdowns. When the player receiving them is running back Alvin Kamara, it makes sense. But Kamara, who made his return in the Saints' 21-9 victory against the Bears after testing positive for COVID-19, caught only two passes for 17 yards and was a non-factor in the passing game.

To be clear, New Orleans started this game flat offensively. But Brees was clinical on third downs and helped the Saints convert 11 of 17. So although it took some time to get going, Brees fit passes into tight windows, namely to receivers Deonte Harris and Michael Thomas, both of whom returned Sunday. The checkdown is still a big part of New Orleans' offense. It just bodes well for the team that even though Chicago could generate pass pressure with a four-man front, the Saints could make enough plays elsewhere to win.

In the 20-13 Ravens victory against the Titans on the road, Baltimore's defensive and offensive coordinators schemed up brilliant plans to help their team win. First let's look at Martindale, the defensive coordinator. All game long, Baltimore stacked the box and made life difficult for Derrick Henry. And Baltimore's defensive line rose to the task, often getting their first hit on Henry when he was behind the line of scrimmage. That was the main reason why Henry, the 2020 rushing champion, was held to a season-low 40 rushing yards on 18 carries.

Derrick Henry had no room to run against at a Ravens defense that stacked 8+ defenders in the box on 72% of Henry’s runs, the 4th-highest rate any RB has faced in a game this season (min. 10 carries).

On offense, it was a tale of two halves. In the first, offensive coordinator Greg Roman dialed up a lot of slow-developing plays that took too long. That led to four first-half sacks for quarterback Lamar Jackson, who — for his part — held onto the ball way too long and didn't get rid of it or scramble. At the start of the second half, Roman instead called a bunch of quick passes to players in the flat, option rushes that diversified Baltimore's rushing attack and schemed touches for receiver Marquise Brown to use his speed. Jackson was sacked only once in the final two quarters and the Ravens relied on his legs to help secure the victory.

The Browns had one practice on Friday, a walk-through on Saturday and their head coach and several key players out because of COVID-19 issues. Yet, it was the full-strength Pittsburgh Steelers who looked utterly unprepared and uninspired in their 48-37 loss against Cleveland. That is a coaching issue and the blame falls on Tomlin.

Roethlisberger, in a pattern that has been evident all season long but has accelerated recently, has thrown short, behind receivers, has had balls batted at the line and has been generally inaccurate. He matched his four touchdowns with four interceptions. With a $41.25 million cap hit next season, per spotrac.com, this leaves the Steelers in a situation in which they need to assess life without Roethlisberger in the future and they need to strongly consider moving on. And Schuster, the receiver who criticized Cleveland with his "the Browns is the Browns" comments has made headlines this season more for his mouth than his play.

Chicago's 21-9 loss to New Orleans wasn't all on quarterback Mitchell Trubisky. In particular, an easy drop on a perfectly thrown pass to receiver Javon Wims in the first quarter wiped away a touchdown that would've altered the game. But throughout the game, it became clear that Bears head coach Matt Nagy and offensive coordinator Bill Lazor simply didn't trust Trubisky.

Lol, HOW did Javon Wims drops this touchdown???pic.twitter.com/cBLU7xm61Z

Take late in the first half. The Saints punted the ball to the Bears, giving Chicago 1:49 to either get in field goal range or take it 82 yards for a touchdown. The Bears, instead, opted to run the clock out and punt it back to the Saints, despite facing just a three-point deficit at the time. Trubisky has his limitations as a passer, but the Bears just abandoned the deep passing game. Instead, Chicago kept calling short, unimaginative passes well short of the sticks. Chicago converted just one of 10 third down attempts in the game, and it came after 58 minutes of game play. Entering the final series of the game, when the Bears converted four first downs in a final, meaningless drive they moved the chains as many times as they punted: seven. Trubisky might have played his last game for the Bears, but if he did, his coaches certainly didn't help him on his way out.

This wasn't the only reason the Titans lost to the Ravens. But there's just no question it wasn't aggressive enough in a game of this magnitude. Facing a four-point deficit with 10 minutes left to play in the fourth quarter, Titans coach Mike Vrabel opted to punt the ball on a 4th-and-2 from Baltimore's 40-yard line.

This is the first time in our database (complete back to 1994) that a team in the playoffs punted on 4th and 2 from this field position, down by one score in the 4th Quarter https://t.co/DNdUZL4fzwhttps://t.co/LLUp1yMUgt

There's a chance the Titans wouldn't have converted had they gone for it, to be sure. But this is a team with all-pro running back Derrick Henry, who became just the eighth player in NFL history to rush for 2,000 yards in a single season. Quarterback Ryan Tannehill is also mobile and quick. Instead, Tennessee punted the ball for 25 yards and allowed the Ravens to march down the field and kick a field goal. Those would be the last points of the game.

And in its own game, Pittsburgh also had a chance, down 12 in the fourth quarter from its own 46-yard line, to go for it on a 4th-and-1. Rather than go for it, they punted, the Browns scored on the following drive and the Steelers lost.