Home » NFL » Nick Bosa: Cardinals making big mistake if they pass on me

INDIANAPOLIS — While speculation swirls about what the Cardinals will do with the 2019 NFL Draft’s No. 1 overall pick, Nick Bosa made clear what they definitely shouldn’t do.

The former Ohio State star said Saturday during his NFL Scouting Combine press conference that Arizona will be making a "big mistake" if it passes on him.

He’ll soon get a chance to deliver the message directly to the club, as Bosa will meet with the Cardinals on Saturday night, along with the other teams holding picks within the top eight selections of Round 1.

Bosa is widely considered to be among the players in the mix for the top overall pick, although there seems to be momentum building around the idea of Oklahoma QB Kyler Murray being the choice even though Arizona drafted QB Josh Rosen in the first round last year.

"I wouldn’t say anything about Kyler," Bosa said. "I would just say that I’m somebody who loves the game more than anybody. I’m going to come in and I’m going to work everyday, every practice trying to find new things to better myself. If you do draft me, then you have somebody’s who’s going to improve throughout my entire career."

"That would just mean so much to me to be thought of as the best player in the draft," he said.

NFL Network analyst Daniel Jeremiah has Bosa No. 1 on his board, and the former Buckeye intends to leave any doubts about his ability behind in Indianapolis. He plans to be a full participant when defensive linemen hit the field for workouts on Sunday.

"I’ve been talking myself up pretty good to (NFL teams) so I’m definitely ready to get out on the field, get on the bench (press) tonight and definitely leave no doubt, like I said before."

Bosa missed all but the first few games of last season with a bilateral core muscle injury, but he said he’s been working out without lingering soreness for a few weeks now. 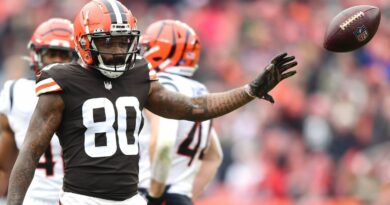