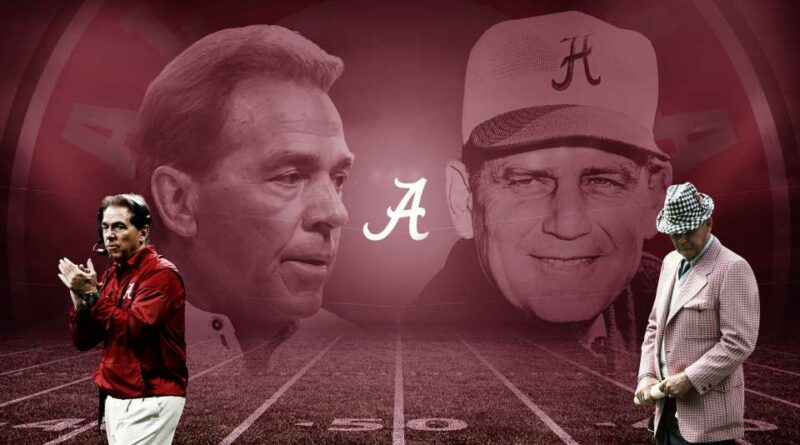 One week before he put on an all-time performance in the College Football Playoff championship game, DeVonta Smith faced a question about the lasting lesson he’ll take from playing for Nick Saban.

“With him, it’s how you treat people,” Smith said on Jan. 4. “No matter how people are treating you, you always treat everyone else with respect.”

Saban will be treated with reverence after leading No. 1 Alabama to a 52-24 blowout victory No. 3 Ohio State on Monday. That gave Saban a sixth national championship with the Crimson Tide, and seventh overall as a head coach. Monday’s win broke the record set by former Alabama coach Paul “Bear” Bryant.

Saban treats that comparison with a different kind of respect.

“I don’t think anybody really compares to Coach Bryant,” he told reporters after the game. “In the era that he coached; the era that he won. He won a lot of different ways. He won throwing it. He won running a wishbone. He won it running conventional offensive formations. His legacy lasted over a long, long period of time.”

Sound familiar? Saban has accomplished the same feat, and those dueling legacies converged one more time with the Buckeyes as the backdrop.

Jeff Rutledge remembers walking into Bryant’s office a week before the 1978 Sugar Bowl matchup against the Buckeyes. The Alabama quarterback planned on getting married the following weekend, but that meant an uncomfortable conversation in Bryant’s office. He recalls it with remarkable accuracy:

Bryant: “Do you know who we’re playing?”

Rutledge celebrated his 43rd anniversary with his wife Laura on Jan. 7, mere days before Saban passed his own coach in championships won. Those memories came flooding back when he heard Smith talk about Saban.

“I heard that, and Coach Bryant did talk about those things,” he said. “Forget football. He would come in and talk about calling your mom and your dad. Calling your high school football coach and thanking them for raising you the way they did. It was about life. It was about that respect.”

Football, of course, was the mechanism for motivation. Bryant left that conversation with a simple message for Rutledge.

“You better play your ass off, son.”

Rutledge obliged. Alabama beat Ohio State 35-6 and followed up with a national championship the next season. Bryant would win his final national title in 1979. It was his sixth in 25 seasons — a bar that seemed impossible to clear when Saban took over at Alabama in 2007. Yet he followed Bryant’s formula to perfection, on an accelerated pace. Saban now has six national championships in 14 seasons, and he has done that by evolving with a sport that moved from the BCS era to the four-team College Football Playoff.

“We all have to adjust with the times,” Saban said. “Obviously things are a little different now. The challenges are a little bit different with the spread offense, the things that make it more difficult I think to play good defense in this day and age.”

Rutledge notices another common thread between the two coaches. As a quarterback, he had more contact than most players with Bryant during his playing days.

“Coach Bryant would come into our meetings every now and then, and sit, listen to whoever our coordinator was,” Rutledge said. “He let our coaches coach. From what I see, Coach Saban does the same thing.”

Offensive coordinator Steve Sarkisian is proof of that. Sarkisian took the Texas job on Jan. 2, becoming the 12th current FBS head coach to have served as an assistant under Saban. Sarkisian, who was a two-time head coach at Washington and USC, first joined the Alabama staff as an analyst in 2016.

“This is the greatest college football coach of all time, and recognize the space that you’re in,” Sarkisian said. “There’s been a variety of us that have come and gone through here. But he’s a tremendous mentor and if you allow yourself to be mentored, I think you gain even more out of this experience.”

Sarkisian awarded that experience in 2020, perhaps more than any other previous assistant. He served as acting head coach for the Iron Bowl when Saban tested positive for COVID-19. Under his tutelage, Smith, quarterback Mac Jones and running back Najee Harris all finished among the top-five vote-getters in the Heisman Trophy race.

Of course, Saban has built the dynasty with five-star recruiting classes, but there is a twist. Smith and Harris were among the players who could have opted for the 2020 NFL Draft. After all, Alabama is a factory that has produced the most first-round picks of the last decade.

Saban is active in those yearly discussions, where he emphasizes to players the difference between first-round money and being a second-day pick. He does that out of respect for those players.

“At the same time, I always tell players, if you’re not 100 percent committed to getting better at the things that you need to improve on, then you’re not going to improve your draft status,” Saban said. “So, it’s probably not going to do any good for you to come back.’”

Jones, like Rutledge, delivered against Ohio State: He passed for 464 yards and five touchdowns on Monday. Jones was asked afterward whether Saban is the greatest coach of all time.

“C’mon, man,” he responded. “Of course he is. How could he not be? He does it the right way. He recruits well, but more importantly develops great players and young men. I’m just so blessed that he gave me a chance to come here along with all my teammates. I wouldn’t trade it for anything. He’s the greatest to ever do it.

“He’ll be the greatest for a long time.”

Rutledge knows how Jones feels. Rutledge still talks about the feeling after a big play when Bryant smacked his helmet with the folded-up depth chart he clutched in his hand — a measure of rare emotion during games. While Saban might be more emotional on the sideline, that respect crosses generations.

“Records are made to be broken, but knowing I played for Bear it’s a great accomplishment for Coach Saban,” Rutledge said. “It’s taken a long time to break that record, but you’re happy for the current players because you know what that takes.”

Saban shared that respect for this year’s team, which battled through an unprecedented pandemic to complete the season. He smiled a little more than usual after this victory, and labeled this group as the “ultimate team.”

“We played 13 games and went undefeated with all the disruptions we had this season,” he said. “I think there is quite a bit to write about when it comes to the legacy of the team.”

That is quintessential Saban. While the focus will always be on his accomplishment, he would rather talk about the players and coaches who made that possible instead while moving on to the next one.

That is the root of “The Process.” No matter how many national titles Saban piles up, he won’t see that praise in the same way.

Instead, he will show respect for the coach he just passed and the game both mastered at Alabama.

“I think Coach Bryant is sort of in a class of his own in terms of what he was able to accomplish, what his record is, the longevity that he had and the tradition he established,” Saban said. “If it wasn’t for Coach Bryant, we would never be able to do what we did.”