This is such a big weekend in college football, there are multiple ways we could describe it.

Is it Showdown Saturday?

Either way, teams with College Football Playoff aspirations have the opportunity to make statements in showdowns across the country. On the heels of the first CFP committee rankings, nine games with either playoff or conference championship game implications are on the schedule, including two top-10 matchups in the SEC.

The biggest, of course, is in Baton Rouge, Louisiana, between No. 1 Alabama and No. 3 LSU. We all expected Alabama to be in this position when the season began. But few would have guessed in August that the Tigers would debut at No. 3 in the first selection committee rankings.

Back then, Ed Orgeron was on the hot seat and nobody knew what to expect out of Joe Burrow and the revamped offense. LSU was picked to finish fourth in the SEC West in the preseason media poll, and the Tigers were an underdog to Miami in the season opener.

Fast-forward to today, and LSU improbably controls its destiny in the playoff race.

Even more improbably, there is a bigger surprise team in the SEC this season. In the four years since the playoff began, the selection committee had never ranked Kentucky. That all changed earlier this week, when the Wildcats made their debut at No. 9, just ahead of Ohio State.

Kentucky hosts No. 6 Georgia on Saturday to determine the SEC East winner. Both teams have one loss, so both control their playoff destiny, too. Yes, even Kentucky. If the Wildcats beat Georgia and then win the SEC championship, it is hard to envision any scenario in which the SEC champ gets left out.

Now let’s take a closer look at these monster matchups.

This is the fifth top-five matchup between these two teams, and the seventh time in the past 10 meetings that they have played as top-10 teams. There is only one problem for LSU over that stretch: Alabama has dominated the series, winning seven straight. There is also this bit of history that is not on LSU’s side: No team ranked No. 3 in the first CFP rankings has ever made the playoff.

The Crimson Tide are favored once again, and ESPN’s Football Power Index gives them an 87.9 percent chance to win the SEC West. If Alabama beats LSU on Saturday, it will do just that.

As dominant as Alabama has been, this game presents the biggest challenge yet for Tua Tagovailoa and the blisteringly hot Tide offense. Alabama leads the nation in scoring offense, averaging 54.1 points per game. But LSU ranks sixth in FBS in defensive efficiency and seventh in FBS in scoring defense (15.1 points per game). Only one of Alabama’s first eight opponents ranked in the top 40 in defensive efficiency (Missouri, 30th), and Alabama scored only 39 points in that game.

The question is: Even if the LSU defense can slow Alabama down, can the Tigers score enough to win?

The playoff ramifications are huge. If Alabama wins, the Tide will remain No. 1. If LSU wins, and then goes on to win the SEC championship, the Tigers would be a playoff lock. What does that mean for a one-loss, non-conference champion Alabama? That would present another challenge for the selection committee, not unlike the one it faced a year ago, when it chose the one-loss, non-conference champion Tide at No. 4.

One key difference between last season and this is that an undefeated Notre Dame team could add a potential roadblock.

Michigan is now FPI’s favorite to win the Big Ten East, but the Wolverines have to get past the Nittany Lions if they want to stay on track for a spot in the conference championship and keep their playoff hopes alive. According to Playoff Predictor, Michigan’s chances to reach the playoff would increase from 36.6 percent to 45.4 with a victory Saturday, but drop to 17 percent with a loss.

How much will “revenge” play a motivating factor?

Michigan is on a self-described “revenge tour” this season against the teams that beat the Wolverines a year ago. So far, Michigan has taken down Wisconsin and Michigan State. Penn State, which embarrassed the Wolverines 42-13 last season, is next.

Watch for the key matchup between Michigan running back Karan Higdon and the Penn State rush defense. Higdon has rushed for 100 yards in six consecutive games, the longest streak by a Michigan player since Mike Hart had eight straight 100-yard games in 2007. The Nittany Lions have allowed only two 100-yard rushers this season.

The winner clinches a spot in the SEC championship and staves off playoff elimination. While Georgia has made six SEC championship appearances and was given a 75 percent chance to win the East in August, Kentucky is one of four teams that hasn’t played for the SEC title since the championship game was added in 1992.

Georgia goes in as a 9-point favorite, but on paper, this does not look like a gimme for the Bulldogs. Both rank in the nation’s top 10 in defensive efficiency, and how Georgia quarterback Jake Fromm plays against an aggressive Kentucky defense will be a huge key.

Kentucky brings pressure on the quarterback on 43 percent of dropbacks, the third-highest rate in FBS behind Clemson and Alabama. Fromm has been sacked on 12 of 42 dropbacks when pressed, the highest rate in the conference.

The last time Georgia played at Lexington, in 2016, it needed a last-second field goal to win.

With a victory, Georgia’s playoff odds jump to 51.4 percent, but a loss drops it to 10.1 percent. Kentucky faces much bigger odds. Even with a win, its playoff odds increase to just 1.9 percent, while a loss would essentially eliminate the Wildcats from contention.

Though we don’t have any models that can predict the odds of Kentucky making the playoff if it wins out, common sense says the committee would have a hard time leaving out a one-loss SEC champ that has victories over No. 11 Florida, No. 6 Georgia and the SEC West champion.

Even though the Sooners are outside the top four, they are right in the middle of the playoff race. FPI gives them a 77 percent chance to reach the Big 12 championship game, higher than any other team in the conference.

The situation is not unlike 2015 and 2017. In the first CFP rankings those seasons, Oklahoma had one loss and sat outside the top four, yet made the playoff both years. But a second loss this season would virtually eliminate Oklahoma from contention.

The Red Raiders aren’t pushovers. Quarterback Alan Bowman ranks No. 7 in the nation in passing yards with 2,411. The pressure will be on the revamped Oklahoma defense to contain big plays. The last time a top-10 Oklahoma team came to Lubbock, Texas Tech won 34-27 in 2007.

If Oklahoma is the current favorite to make the Big 12 title game, the winner between the Mountaineers and Longhorns is the favorite to join it. A victory Saturday would give Texas a 72 percent chance to reach the title game; West Virginia’s odds would jump to 65 percent with a win.

With two losses already, the Longhorns’ playoff odds are a long shot at best. But West Virginia could possibly find a way in if it wins out and gets some help ahead of it in the rankings. Will Grier recovered from the most miserable performance of his career, against Iowa State, with a 353-yard passing day against Baylor last week.

Texas, meanwhile, comes in off a tough 38-35 loss to Oklahoma State. Though its playoff hopes are all but gone, there is plenty to play for in Austin. Earlier this week, coach Tom Herman compared the situation to the season-opening loss against Maryland.

“We’re going to figure out, you know, what’s really inside of our guys,” Herman said. “I think they will respond as well, if not better than we did after Week 1.”

In other games involving CFP contenders …

Louisville at No. 2 Clemson (noon ET, ABC): The Tigers go in this game as 39.5-point favorites and have the highest odds among any team to make the playoff, at 93.4 percent.

No. 4 Notre Dame at Northwestern (7:15 p.m. ET, ESPN): Notre Dame is in great position to make the playoff, but the Irish have to hold off a tough Northwestern team that has beaten Michigan State and Wisconsin this season.

California at No. 8 Washington State (10:45 p.m. ET, ESPN): So you’re saying there’s a chance? It might look bleak for the Pac-12, but FPI gives the Cougars a 1.4 percent chance to make the playoff. Imagine the gift America would get with an entire month featuring Gardner Minshew’s moustache!

Nebraska at No. 10 Ohio State (noon ET, Fox): Even though the Buckeyes lost to Purdue, they still have a 32.5 percent shot to make the playoff.

Welcome to Super Bowl week! Why Miami is the perfect host for Super Bowl LIV 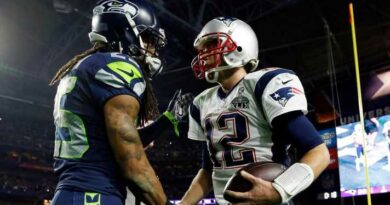 Ranking every Super Bowl game from best to worst: Seahawks have been on both ends