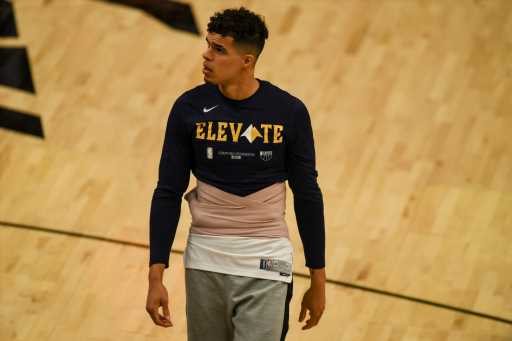 During a lighter moment at Ball Arena last week, sometime between the 10th or 11th goal the Avalanche slapped on Mike Smith’s tab, KOA’s Brandon Krisztal leaned over and asked me this:

“So which guy do you think actually ends up playing in a higher percentage of his team’s regular-season games over the life of their Denver contract?”

“Who are my choices?”

“Kris Bryant with the Rockies? Or Michael Porter Jr. with the Nuggets?”

Two bad backs. Two awful contracts. Two franchises stuck right where they are, incapable of moving forward, until either a.) those bum backs heal; or b.) said contracts are off the books.

I went with Bryant making providing some value on his $182 million contract, even though he’s appeared in just two games between April 26 and June 3. Even though everything about that deal smells, at first blush, to be a classic case of agent Scott Boras selling Dick Monfort a lemon and laughing all the way to the bank.

But it was close.

“A concern for the organization?” Kroenke said, repeating my question about MPJ’s barking back. “I’d say we’re concerned about (Porter’s) injuries. We’re not concerned about the contract.”

Except that those two separate threads are basically part of the same big financial knot — former president of basketball ops Tim Connelly’s farewell kiss to the Mile High City.

Connelly, whose jump to Minnesota had Kroenke sounding, at times, like a bitter ex, left Chopper Circle better than he found it. If NBA rosters were properties, TC built the Kroenkes a sweet house with a two-car garage, a solid roof and a kitchen to die for.

The dude also skipped town before he could finish the basement, as he promised. Oh, and the toilets leak. A lot.

“You know, you can look back on everything and say, you know, ‘They say this or they say that,’ but we’ll start with the person,” Kroenke continued. “Michael (Porter) is a great young man, a very hard worker that loves the game. And we will bet on those guys 10 times out of 10.”

Giving a max deal to MPJ, whose medical history coming out of Missouri had more red flags than the last 15 Indy 500s, is a fireable offense in most NBA towns.

“I think as an organization, we bet on people,” Kroenke reasoned. “And being in a market like Denver, we always have a stated policy: If you want to be around Denver, Colorado, we’re going to try to figure something out with you sooner rather than later.

“And in Michael’s case, we had an option to extend him early. He was coming off some very spectacular basketball. (His) health was in a good place. And we decided to keep our organizational philosophy and extend early.”

As currently composed, though, the Nuggets’ needs remain the same: more shooters, more length, more rim protectors. A healthy MPJ helps with the former two issues. The latter, not so much. Even at (fingers crossed) 100%, even at his apex, Porter’s a 6-foot-10 forward who plays like he’s 6-3, a defensive non-entity on a team that still lacks stoppers.

Seven of those eight wound up among the NBA’s top six in team 3-point shooting defense during the regular season — including all four conference finalists this spring. (The Nuggets landed at 10th in 3-point percentage defense in 2021-22 and 11th the year before.)

“We’re entering a new phase of the organization and this squad in particular, which is, it’s championship or bust,” Kroenke declared. “And those are the first time those words have been uttered around these halls.”

With that, the gauntlet was thrown to the floor. Too bad MPJ, the guy Kroenke just paid $172.5 million ($145.3 million guaranteed) can’t bend over to pick it up.