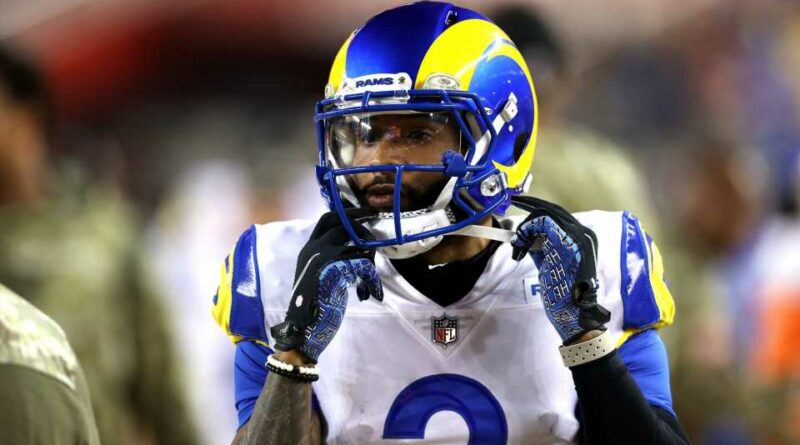 Hollywood’s latest star is still on the rise.

It wasn’t too long ago when Odell Beckham Jr. expressed desire to play on the West Coast, and he finally got the opportunity this season, when the Browns released him and the Rams brought him in to finish out the season.

Beckham’s Browns tenure wasn’t all it was cracked up to be: With inefficiencies at quarterback and a run-heavy attack, Beckham couldn’t quite replicate the successes that he had with the Giants in 2 1/2 seasons with Baker Mayfield in Cleveland, resulting in just seven touchdowns in 29 games in orange and brown.

Well, from an organization scuffling to make the playoffs to a team that’s a perennial Super Bowl contender, Beckham got another opportunity to bolster his reputation as one of the game’s best receivers with Sean McVay and Matthew Stafford in LA.

Here’s how he’s played so far:

So far with the Rams, Beckham has caught nine passes for 127 yards on 18 targets across three games.

He hasn’t exactly lit the world on fire since landing in Hollywood, but obviously, there’s an acclimation period in a new offense. In Beckham’s Week 10 debut with the Rams vs. the 49ers, he was primarily used as a decoy receiver, catching just two passes on three targets in the game.

After a Week 11 bye — and more time to get Beckham involved in the offense in the wake of the loss of Robert Woods — Beckham caught five passes for 81 yards from Matthew Stafford. Beckham scored his first TD as a Ram in that game.

Beckham’s third go of it, a matchup with the Jaguars in Week 13, was a little lighter on work given the utter domination by both running back Sony Michel and wideout Cooper Kupp. Beckham was targeted just five times in the matchup, with two catches for 28 yards total.

Part of the difference in Beckham’s production with the Rams as opposed to the Browns this year is how he’s used: Through just three games, Beckham has already been targeted deep (20-plus yards) down the field six times, as opposed to 10 times in six games with the Browns, per PFF.

It’s also important to note that Beckham’s snap counts by position aren’t dramatically different from how he was used with Cleveland, either, between playing in the slot and playing out wide.

Here’s a breakdown of Beckham’s 2021 season with the Browns vs. his early goings with the Rams: