When left tackle Russell Okung goes to work for his new team — the Panthers — he’s bringing his helmet, not a hardhat.

"I’ve made it really clear, I’m not here to just rebuild," Okung said Tuesday during his introductory press conference, via the team website’s Zach Goins. "I’m here to win, and I’m here to win right now."

A major roster shift is underway in Carolina with longtime head coach Ron Rivera gone and Matt Rhule in. Longtime franchise face Cam Newton has been released, standout linebacker Luke Kuechly has retired, tight end Greg Olsen has been let go and on and on.

Another significant move was trading five-time Pro Bowl guard Trai Turner, 26, for the 32-year-old Okung, a two-time Pro Bowler who played in just six games last season with the Chargers.

With star running back Christian McCaffrey (with a brand-new mega-contract), free-agent wideout Robby Anderson and new starting signal-caller Teddy Bridgewater on board in addition to Okung, the veteran lineman was rife with ambition.

"I think, if anything, those that were brought in are just going to make us better, a more talented team," Okung said.

"What a talent. What a real talent," Okung said of McCaffrey. "He is a playmaker. He makes plays all over the field.

"I heard he loves offensive linemen, so I look forward to a good Christmas gift from him."

As Okung looks forward, he also left his three seasons with the Chargers behind him and bid them no ill will. Offering some insight into the situation, he mentioned that he had talked with coach Anthony Lynn beforehand and him leaving L.A. was a transaction that had long been in motion.

"It was a conversation that the head coach, Anthony Lynn, and I had been having for some time," Okung said. "Some things just didn’t work out and it came down to me being traded."

So now, Okung is focused on making the Panthers a success from the get-go, not down the line.

"I’m excited. I can’t wait to see what we’re going to do this year, whenever that starts," Okung said. "I think they made a great decision going out to get me, and I’m happy with where I am." 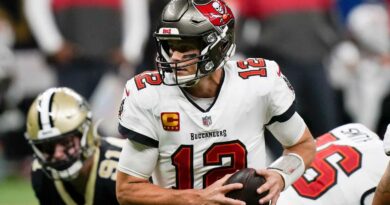