There’s a stalemate in Kansas City.

Orlando Brown and the Chiefs are not expected to come to terms on a long-term extension before Friday and the offensive tackle is likely to hold out of training camp, NFL Network’s Mike Garafolo reported Tuesday.

Brown and his representation have spoken to the Chiefs in recent days regarding an extension, but the parties are nowhere close on a deal, and if an extension isn’t reached, Garafolo added Brown is expected to sit out the start of camp and potentially all of it, with “even Week 1” in question.

Brown, who played at left tackle last season, which has long been his desire, is aiming for top-of-the-market money at the position (roughly $23 million), but Garafolo reports the Chiefs’ offers has been consistent with top money for a right tackle ($19 million).

The Chiefs applied the franchise tag to Brown, who has yet to sign it, and the deadline for tagged players to sign long-term deals is Friday at 4 p.m. ET. If Brown were to play 2022 on the franchise tag, he’d receive $16.2 million.

Garafolo reported Friday that talks were expected to heat up early this week to see if a long-term pact could come to fruition, but it would seem that now they are ice cold and the immediate future for quarterback Patrick Mahomes’ blindside blocker is in question.

Brown, a three-time Pro Bowler, was acquired by the Chiefs via trade last offseason with the Baltimore Ravens. One of the focal points in the Chiefs’ desire to revamp and improve their offensive line to protect Mahomes, things went swimmingly for Brown and K.C. The tackle also got his wish of playing solely at left tackle. Brown had played right tackle his first two seasons with the Ravens before moving to the left side as a result of an injury to Ronnie Stanley. With Brown shipped to K.C. so he could play on the left side, all was splendid for a season. Things clearly aren’t going as well, now.

In addition to Brown in Kansas City, Cincinnati Bengals safety Jessie Bates, who like Brown has yet to sign his tag, Miami Dolphins tight end Mike Gesicki and Dallas Cowboys tight end Dalton Schultz have until Friday to sign extensions after having the franchise tag applied by their respective squads.

Friday is nearing, but as of Tuesday, no long-term deals seem to be getting closer to being signed. 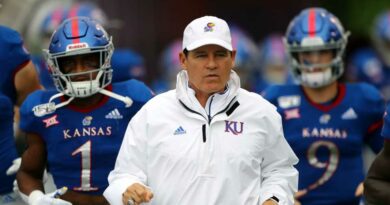