Home » NFL » Overreacting to NFL Week 9: Who dat? My Super Bowl picks are …

Rams-Saints was Christmas in early November for an NFL fan. We woke up Sunday morning annoyed at the extra hour the calendar put in between us and that game. We slogged through the early games waiting for it to start. And when it did, it was a rocket ship.

The Saints built a huge halftime lead at home, the Rams came roaring back, Michael Thomas blew the top off the thing late with a 72-yard touchdown catch and a Joe Horn celebration tribute. This thing wasn’t just Christmas — it was Christmas wrapped in the Fourth of July with New Year’s Eve sprinkled on top.

And you’d better believe it set up our top overreaction item of the week. Which is …

The Saints will win the Super Bowl

They have won seven in a row since losing to Ryan Patrick and the Bucs in Week 1 before everyone knew FitzMagic was going to be a thing this year. They became the first team to beat the Rams this year, setting off that goofy champagne celebration the 1972 Dolphins have every year when the last undefeated team loses. The win puts the Saints on track to be the No. 1 seed in the NFC, meaning a playoff rematch with the Rams would be in New Orleans. Both teams have tough games left — the Rams play the Chiefs and Eagles, and the Saints have two left against the Panthers who are right behind them in the NFC South. But this win, combined with the revenge victory last week in Minnesota, is a statement to the league that the road to the Super Bowl this year runs through New Orleans.

Graziano’s verdict: NOT AN OVERREACTION. Due respect to the Rams and what they’ve accomplished. Play this game in L.A. and the result might have been different. But the Saints look as if they have something special going here. (Remember, one of the games in their current winning streak ended with a missed Justin Tucker extra point. Tell me that isn’t fate?) And if you don’t want to believe in the supernatural, believe in an offense that can beat you with two stud running backs or Drew Brees’ arm as weekly need dictates. The Saints don’t just beat you. They decide how you’re going to be beaten. They’re for real, and they deserve to be Super Bowl favorites at the season’s midpoint.

And they’ll beat the Chargers to do it

Philip Rivers and the gang may be the “other” L.A. team, but they’re red-hot and they’re really good. The Chargers improved to 6-2 with Sunday’s hard-fought victory in Seattle. It was their fifth win in a row, and the only teams that have beaten them this year are the Rams and the Chiefs. Their next three games are eminently winnable against the Raiders, Broncos and Cardinals ahead of a tough Steelers/Bengals/Chiefs/Ravens stretch in December. They could absolutely be 9-2 by the time that stretch starts.

Graziano’s verdict: OVERREACTION. I love the Chargers. I think they’re a very good team that finally avoided its usual lousy start and has as good a roster as any team in the league. On paper — and on the field — they look good enough to make a Super Bowl run. Rivers is one of the best quarterbacks of his generation, and maybe the most underrated, and he’s playing as well as he ever has. The Chargers are great. There’s just one problem, and it’s the Chiefs. Not only do the Chiefs look pretty close to unstoppable at 8-1 and in first place ahead of the Chargers in the AFC West. Not only did the Chiefs beat the Chargers in L.A. to open the season. The Chiefs have beaten the Chargers nine times in a row. They’re better than they are in real life, and they’re in their heads. Tough combination. If the Chargers win in Kansas City on Dec. 13, we may have something here. Until then, tough to imagine them clearing that particular hurdle en route to the big game.

The Falcons will make the playoffs

Atlanta ran all over one of the best run defenses in the league Sunday in Washington and suddenly has won three games in a row to improve to 4-4 after a miserable 1-4 start. They’re loaded with options on offense, as Tevin Coleman and Ito Smith have teamed to minimize the effect of the Devonta Freeman injury. And — fantasy football players, rejoice! — Julio Jones finally found the end zone!

Graziano’s verdict: OVERREACTION. First of all, winning the division is a pipe dream, as the 4-4 Falcons currently trail the 7-1 Saints and the 6-2 Panthers. And sure, 4-4 puts them right in the NFC’s wild-card muddle, but five of Atlanta’s last eight games are on the road, including trips to New Orleans, Green Bay and Carolina. It’s not as if they can’t win games like that, it’s just that they’re going to have to win a bunch of them if they’re going to muscle past the rest of the wild-card contenders in the NFC. Tough road back from 1-4, they’re still playing without their two starting safeties, and they’ll regret that Week 3 home overtime loss to the Saints if they don’t make it in.

Miami’s 5-4 record is that spot on the standings page that makes you double-take. How are they 5-4? How did they just win a game with Osweiler as their starting QB? Part of the answer is that they were playing a fairly woeful Jets team (more on that in a second), but these Dolphins look a little like the do-just-enough-to-win-ugly type of team they were when they sneaked into the playoffs two years ago in Adam Gase’s first season there. Yeah, you didn’t remember that either, did you?

Graziano’s verdict: OVERREACTION. Come on. Osweiler had 139 passing yards in this game, and they won it 13-6. They’ve still got road games in Green Bay and Minnesota and a home game against the Patriots, who dropped 38 on them earlier this year. The Dolphins aren’t going anywhere meaningful without reliable quarterback play, which means either Ryan Tannehill has to get back soon and play like the guy Gase keeps telling us he is or they have to look into signing Sam Bradford. That’s right. I said it.

The Jets need to sit Sam Darnold … for his own good.

Darnold threw four interceptions and got sacked four times in that 13-6 loss Sunday, recording his third straight game with a QBR under 40. His receiving corps is banged-up. The run game is without Bilal Powell. The center could barely get a shotgun snap into his hands all day. The Jets have lost three in a row and squandered a lot of the early-season good feeling around Darnold.

Graziano’s verdict: NOT AN OVERREACTION. Darnold definitely looks like he can be the long-term solution in New York. They need to build the team around him, and they know it. The question is whether they’re doing him and his development harm by playing him while the team around him is as substandard as it is, and it’s not crazy if they decide the answer is yes. It wouldn’t be an insult to Darnold or his future if they decided to give him a mental (and physical) health break for a week or two — a second half or two, something — and let Josh McCown take some of these lumps. 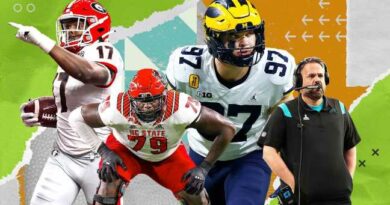 Ficken in, Vedvik out as Jets kicker carousel spins

Packers put away Seahawks, set up rematch with 49ers in NFC Championship Game