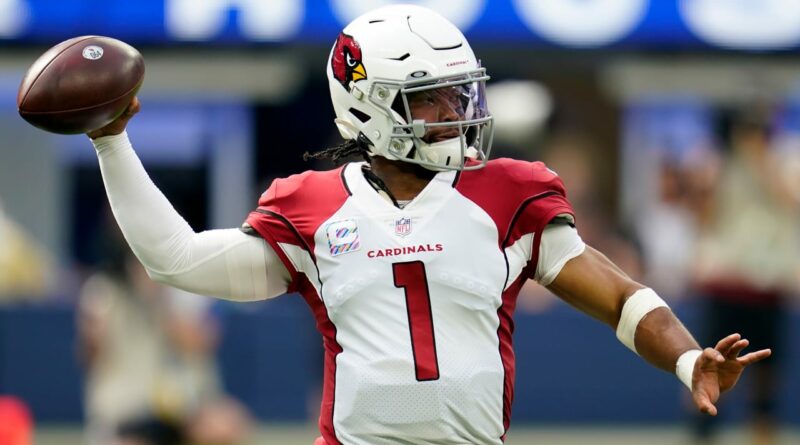 NFL Media researcher Dante Koplowitz-Fleming identifies five of the biggest overreactions from the first four weeks of the 2021 NFL season. The storylines below are bound to play out because, after all, numbers never lie. Right?

Kyler Murray is a lock to win MVP

The Cardinals are off to a 4-0 start for the first time since 2012, but the offense is in a much different place this time around. The 2012 squad had a skeleton crew at QB of John Skelton, Kevin Kolb, Ryan Lindley and Brian Hoyer. It produced 49 fewer points in the first four games than the 2021 Cardinals have thus far. The 2012 team lost 11 of its final 12 games and sputtered to a 5-11 finish.

Nearly a decade later, Kyler Murray is leading a team that has hung 30-plus points on its opponent in each of the first four games, gaining at least 400 yards in every outing. The Cardinals are just the fourth team since the 1970 merger to reach those marks and win each of their first four games. The other three teams in that exclusive club all had two things in common: They had their QB win MVP, and their season ended in a Super Bowl loss. The group consists of the 2013 Broncos (MVP: Peyton Manning), 2007 Patriots (MVP: Tom Brady) and 2002 Raiders (MVP: Rich Gannon).

Murray, like those other QBs, has put up eye-popping stats through four games. His 1,382 total yards and 12 TDs (nine passing, three rushing) compare favorably to the starts of the five most recent MVPs (average of 3.75 wins, 1,356 yards and 12 TDs in their first 4 games).

Cardinals coach Kliff Kingsbury tutored 2018 MVP Patrick Mahomes during their days together at Texas Tech. He could play a more direct role in Murray capturing the hardware this year.

Bills have the best defense since 2000 Ravens

What got the Bills to the 2020 AFC Championship Game? Stellar play from Josh Allen and a high-flying, Brian Daboll-schemed offense, right?

While that might be true, the Bills are dominating on both sides of the ball this year. Coordinator Leslie Frazier’s defense pitched two shutouts in the first month of the season. The last team to accomplish that feat? The 2000 Ravens. Yes, the famed Baltimore unit led by Ray Lewis that allowed just 10.3 points per game on the way to winning the first Super Bowl in franchise history.

Sound like a far-fetched comparison? Let’s compare the first four games for both defenses:

Just as an aside: The 2000 Ravens’ defensive coordinator was Marvin Lewis, who hired Frazier as his DC when Lewis became the Bengals’ head coach in 2003.

If you’re not sold on the comparison to the 2000 Ravens, let’s try another one that surely won’t ruffle any feathers: the 1985 Bears, who featured Frazier at cornerback.

What do this year’s Bills and the Monsters of the Midway have in common? Per Elias, they’re the only two teams in the last 50 seasons to pitch multiple shutouts while scoring 35-plus points in a three-week span (excluding strike-shortened seasons). After rolling over Miami 35-0 in Week 2 and Houston 40-0 in Week 4, the Bills should set their sights on Los Angeles (maybe aim for the second Sunday in February?).

The Cowboys are 3-1 and sitting pretty atop the NFC East. What’s the biggest difference from this year’s 3-1 start to last year’s 1-3 start? It isn’t the offense. Both the 2020 ‘Boys and this year’s team scored exactly 126 points in their first four games.

The difference in Dallas is the D. The Cowboys are allowing 12 fewer points per game than they were through four weeks a year ago. They have 10 takeaways compared with just two through four games last year.

So, which player is doing the most to fuel this defensive turnaround?

I’m going with the league leader in interceptions: second-year stud Trevon Diggs. Diggs’ five picks make up half of the Cowboys’ 10 takeaways. Dallas has picked off multiple passes in each of the first four games, the first time they’ve done so in any four-game stretch since Weeks 10-13 of the 1999 season. Deion Sanders posted three INTs for Dallas during that stretch. Pretty good company for the 2020 second-round pick.

Diggs is tied with Chuck Howley (1968) for the most picks in the first four games of a season by a Cowboys player. He has as many touchdowns this season as his brother, Bills WR Stefon Diggs, who led the league in receptions and receiving yards last year. I’m going to agree with Jerry Jones on this one: Diggs is a receiver “faking it” as a defensive back, and that’s good news for Dallas.

The 2021 NFL season is going just like we all planned. Patrick Mahomes leads the NFL in passing touchdowns, Derrick Henry leads the league in rushing yards and … Deebo Samuel leads all players in receiving yards through four games (OK, maybe we didn’t expect that one).

Of course you wouldn’t! The gold standard at wide receiver, Jerry Rice, first cracked 450 yards through four games in 1988 at the age of 25. He would go on to finish with 1,306 receiving yards, the first of a record nine consecutive seasons with 1,200-plus receiving yards.

Rice and the 49ers finished that season as Super Bowl champions, with the greatest wide receiver of all time being crowned Super Bowl XXIII MVP (Rice set a still-standing Super Bowl record with 215 receiving yards against the Bengals). Is this all a coincidence, or a sign of something more? We shall see.

Time to fit Joe Burrow for his gold jacket

In his return from an ACL tear, Joe Burrow has led the Bengals to their first 3-1 start since 2018, and he has thrown multiple touchdown passes in each game. He’s just the fourth second-year quarterback of the Super Bowl era to post two or more passing touchdowns in each of his team’s first four games.

The other three players in that group have a bronze bust permanently on display in Canton, Ohio.

Burrow is currently on pace for 38 passing touchdowns. The only players with 38-plus TDs through the air in their second NFL season are Warner (1999), Marino (1984) and Patrick Mahomes (2018). All three won MVP in those seasons, and it seems a safe bet that Mahomes will be joining Warner and Marino in Canton one day.

Perhaps decades from now, Burrow will be making history as the first Bengals quarterback to be enshrined in the Pro Football Hall of Fame.

Why are the Steelers resting Ben Roethlisberger, starters vs. Browns?