There wasn't a lot of movement this week with four teams having byes, including the top two teams, and most other games going as expected.

The top of the Pac-12 remains solid with Oregon and Utah ranked No. 6 and 9 respectively in the most recent Amway Coaches Poll.

Ten teams are in action next week.

The Ducks had a bye but should be energized by the fact they have worked their way into the College Football Playoff conversation, so they're not going to want to slip up now. The toughest regular season games are in the rear-view mirror. They should be able to run the table over the rest of the regular season, then there's the conference title game, most likely against another top 10 team in Utah.

Like Oregon, the Utes are well situated for the stretch run. Utah has won five consecutive games since its lone loss of the season to USC. It had a bye to rest up, but is still playing strong under QB Tyler Huntley and RB Zack Moss. All three of Utah's remaining games are against opponents with losing records so while not locked up, that spot in the conference championship game looks like a pretty solid bet.

The Trojans are starting to get their injured players back with the defensive starters that had been out returning in Saturday's 31-26 victory over Arizona State. Freshman QB Kedon Slovis got knocked out the game in the second half but was able to return. He ended up throwing for 432 yards, with 297 yards and four touchdowns coming in a first quarter that ended with a 28-7 lead for USC.

The Huskies chalked up a 19-7 victory over host Oregon State on Friday and have a bye the coming week.  Washington relied more on the ground game with Salvon Ahmed rushing for a career-high 174 yards on 25 carries. His 64-yard touchdown jaunt with 2:34 left put the game away.  Washington is just 2-3 in its last five games and finishes the regular season with games against Colorado and Washington State.

The Bruins had a bye. They have played well of late but four of the last five games have been against teams with losing records. The toughest games are ahead in Utah and USC with the third game left being against California, so time will tell just how much progress the team has made in Chip Kelly's second year.

The injury-riddled Cardinal lost to Colorado 16-13 on a field goal on the last play off the game. K.J. Costello threw for 245 yards in the loss. Stanford had won three of its last four before being dealt the last-second setback. The Cardinal have three games left – conference games against Washington State and California and the season finale against Notre Dame.

Early entrant for NFL photo of the year 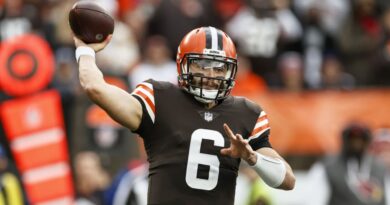