The Rams are halfway to history. To get there — to move to 8-0 — the Rams slayed the fire-breathing dragon more commonly known as Aaron Rodgers, overcame the largest deficit they’ve seen so far, and passed the most difficult test of their season.

On Sunday, the Rams beat the Packers 29-27 in Los Angeles. As a result, the Rams moved one step closer to an unbeaten season and maintained their 3 1/2-game lead over the 4-3 Seahawks in the NFC West. Meanwhile, the Packers dropped to 3-3-1 and are now situated behind both the Vikings and the Bears in the NFC North.

A game featuring the sport’s most talented quarterback, most explosive running back, and best offensive mind surprisingly lacked fireworks until it erupted in a stunning conclusion. The Packers’ defense slowed down the typically explosive Rams offense and the Packers’ offense relied more on the ground game than Rodgers for most of the first half, which led to a low-scoring affair. In other words, it wasn’t really the game we were expecting — for most of the action anyway. But it didn’t lack late drama. After halftime, the game took off. It morphed into the game that was promised.

The Packers came out pounding the ball. Using a steady dose of Aaron Jones and Jamaal Williams, they took an early 10-0 lead while Rodgers wasn’t asked to do much as his offensive line won the war up front. Rodgers thought he scored a touchdown when he connected with Jimmy Graham up the seam, but an automatic scoring review overturned the touchdown and moved the ball back to the 1-yard line. Two plays later, William scored from in close.

On the other side of the ball, the Packers’ defense held firm against one of the best offenses in football. In a tribute to Jeff Fisher, the Rams punted on their first four possessions.

In the first half, the Packers stymied Todd Gurley and the Rams’ running game, and got after Jared Goff on key third downs. The 10-0 deficit was the largest deficit the Rams have faced all year long.

They actually punted on their fifth possession of the game too, but that punt ended up being the unlikely catalyst of their comeback. Punter Johnny Hekker, who also converted a fake earlier in the game, pinned the Packers inside the 1-yard line. On the Packers’ first play, they tried to jam the ball up the middle. They didn’t come close to escaping their own end zone. A safety is how the Rams ended the shutout and trimmed the Packers’ lead to 10-2.

They weren’t done. Just before halftime, the Rams cut into the deficit with a touchdown that was set up by two incredible catches.

The first, which was initially deemed an incompletion until the Rams challenged the call, came via Brandin Cooks.

The second came via Gurley, who corralled a tipped pass and somehow tapped two feet in-bounds. Like the Cooks grab, this one was also ruled incomplete until a review overturned the call on the field.

On third-and-goal during that same series, Goff hit Josh Reynolds for a one-yard touchdown, but the two-point conversion failed. At halftime, the Packers led 10-8.

And then the Rams starting rolling. After the Packers kicked a field goal to extend their lead to five points early in the third quarter, Goff and Gurley hooked up for a 30-yard touchdown that Gurley made look so easy because he’s Todd Freakin’ Gurley.

After Goff and Gurley combined again on the two-point try, the Packers went three-and-out and neared the danger zone, which they promptly entered when Goff hit Reynolds for the duo’s second touchdown. This one extended their lead to 10 points. The Rams looked like the Rams again, threatening to turn a 10-point deficit into a blowout.

The blowout never came thanks to Rodgers, who engineered yet another comeback. Facing a third-and-9 from his own 26 immediately after that Rams touchdown, Rodgers prevented the teetering Packers from falling off the cliff with a 41-yard downfield strike to Davante Adams in the face of pressure. From there, Jones took a handoff 33 yards for a touchdown that turned a 10-point game into a three-point game.

Early in the fourth quarter, the Rams settled for a field goal to extend their advantage to six. As so many teams have come to realize, holding six-point leads against Rodgers is just asking to trail by one point in a matter of minutes (just ask the Chicago Bears). Sure enough, Rodgers beat a Rams blitz with a 40-yard touchdown to Marquez Valdes-Scantling.

After the extra point, the Packers led by one.

The two teams exchanged punts before the Rams pieced together a seven-play, 24-yard drive during which McVay uncharacteristically went conservative and settled for a field goal that gave the Rams a two-point lead with just over two minutes to play. Giving Rodgers the ball back in a scenario that requires only a field goal to win is usually suicide, but Rodgers never got the ball back. On the ensuing kickoff, returner Ty Montgomery fumbled. The Rams recovered. And they ran out the clock.

Rodgers, the former Cal quarterback, never got the chance to lead the Packers to yet another come-from-behind win he deserved because the Stanford kick returner fumbled away that chance.

The Packers lost, but they can take solace in the fact that they got their running game going. This could be important down the stretch, especially if Rodgers is forced to deal with the knee injury he’s been playing through since Week 1.

Against a front featuring two of the best defensive tackles in all the land, the Packers’ offensive line won up front. Immediately, they established the run. Jones rushed for 86 yards on 12 carries and a touchdown. And Williams scored the Packers’ first touchdown of the game.

Aaron Jones is happy for his pal Jamaal Williams scoring a TD, maybe you all should be happy for him too!! pic.twitter.com/1nwcR1UeNs

The Packers’ running game led them to an early advantage before Rodgers took over. At halftime, Rodgers was 7 of 13 for 127 yards and no touchdowns. By the end of the game, he was 18 of 30 for 286 yards, one touchdown, no picks, and a 102.9 passer rating.

That’s not the gaudiest statline by Rodgers’ standards, but he didn’t really make any mistakes. The beginning of the game saw him let his running game carry the offense in what was a low-scoring, boring affair. But when the Packers needed him to turn it up a notch in the second half once the Rams’ offense heated up, Rodgers responded by engineering two 75-yard scoring drives to turn a 10-point deficit into a late lead.

He just never got a chance to mount a final go-ahead drive.

Speaking of the Rams’ offense heating up, it might’ve taken them a while to do so, but once they finally got going, they reminded the world that they’re impossibly difficult to stop. With three minutes to go in the first half, the Rams trailed 10-0. Which means they scored 29 points in just over a half of football. Give the Rams’ defense credit for their first two points of the game, but it was all Goff and Gurley after that.

Goff finished 19 of 35 for 295 yards, three touchdowns, and 111.0 passer rating. Gurley racked up 114 rushing yards on 25 carries and 81 receiving yards on six receptions. Put together, he totaled 195 yards on 31 touches. It’s also worth noting that he could’ve scored another touchdown on his final carry of the game, but he allowed himself to get tackled to let the clock run out.

Real quick: Shoutout to the Rams’ special teams, which is under-appreciated (as all special teams units are), but contributed significantly on Sunday. First, there was the fake punt that Hekker and Sam Shields (formerly of the Packers, I should add) pulled off to perfection.

And then there was Hekker’s punt that pinned the Packers inside their own 1-yard line, which led to a safety on the next play. Guess who downed that punt? Former Packer Sam Shields.

Just a reminder that the Rams won by two points. For those two crucial points, the Rams can thank their special teams and defense.

Speaking of that defense, Aaron Donald delivered another Defensive Player of the Year caliber performance. He notched two sacks, which increased his sack total on the year to 10. Both came at significant moments in the second half.

With the Packers driving on their first series of the second half, Donald clobbered Rodgers to end the drive and hold them to a field goal.

In the fourth quarter, after the Rams punted down by a point, Donald again got to Rodgers to force a punt that preceded their game-winning drive.

The Packers lost, but let’s credit their defense for stopping the Rams for most of the first half and pitching a solid game against an unstoppable offense. They generated five sacks, three of which came on third downs in the first half. The standout performer was rookie cornerback Jaire Alexander, who broke out in a big way. He finished with seven tackles and five passes defended.

If the Packers are looking for a silver lining, it’s that Alexander looked like a stud in their biggest game of the season.

The Rams are the best team in football, but they do not play in the best stadium or on the best field. That much was made clear on Sunday.

For one, Packers fans made the Coliseum feel like the game was being played in Green Bay. The crowd even forced the Rams to use a silent count at times.

And two, the field was a total mess.

Are the #Packers playing #USC or the #Rams? The logos are bleeding through one another. pic.twitter.com/ZX0Al11TyU

Our Will Brinson explains:

Apparently what happened, per the broadcast, was the field got soaked on Saturday night and the grounds crew was unable to get all the paint off the field from USC’s matchup against Arizona State (a surprising 38-35 loss to Arizona State). As such, their only option on Sunday morning was to just toss a ton of paint on top of the paint already in place in order to get the Rams helmet logo on the field.

The Rams are one of the more aesthetically pleasing teams to watch. The Rams’ field? Not so much.

The Rams face another test next week — a test that might trump Sunday — when they travel to New Orleans to face the Saints. The good news is that even if they see their undefeated season end, they’ve pretty much already pulled away within the division. The bad news is that if they lose, they might not get home-field advantage in the playoffs considering the Saints only have one loss entering Sunday night’s game against the Vikings.

The Packers also won’t get a breather. They get the Patriots in New England next week.

Relive the game in our live blog below. 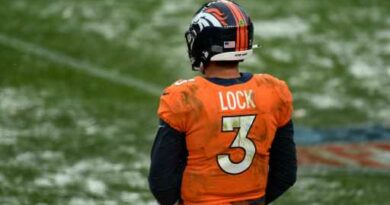 Broncos Analysis: Whoever is hired as general manager, they will be facing the same issues