FOXBOROUGH, Mass. — The Green Bay Packers had been using safety Jermaine Whitehead as an inside linebacker in some of their defense packages but that option was taken away because he was ejected late in the second quarter of Sunday night’s game against the New England Patriots.

White slapped Patriots center David Andrews in the helmet at the end of a 10-yard run by New England’s Cordarrelle Patterson with 3:06 left in the first half.

Referee Brad Allen threw out Whitehead but it was unclear if he did so with consult of the NFL’s head of officiating, Al Riveron. This year, the league added the option of ejecting a player after review from the league office.

Antonio Morrison, a true inside linebacker, replaced Whitehead after the ejection.

The Packers’ defense was already in a state of change after they traded safety Ha Ha Clinton-Dix to Washington on Tuesday. Defensive coordinator Mike Pettine moved cornerback Tramon Williams to safety in place of Clinton-Dix and also played seldom-used defensive back Josh Jones as well.

The Packers also had some in-game change on offense after right tackle Bryan Bulaga left the game in the first half because of a knee injury and was replaced by Jason Spriggs. The Packers said Bulaga was questionable to return. He walked to the locker room under his own power but did not return before halftime. 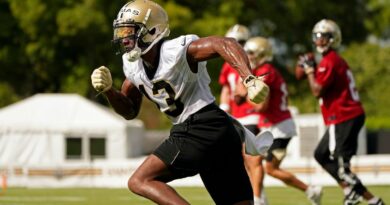 Vikes' Rudolph: We 'didn't have an identity' on offense