It wasn’t just that Patrick Mahomes threw for a ton of yards and four touchdowns. Most impressive was how he did it.

Mahomes juked, danced, and jumped in and out of the pocket. Sometimes he just dropped back and fired pinpoint throws downfield. He tossed shovel passes and flung it sidearmed.

The common thread was that just about everything he did worked for the defending Super Bowl champion Kansas City Chiefs, who rolled past the Baltimore Ravens 34-20 on Monday night.

Mahomes put on a scintillating show while outperforming Lamar Jackson, who’s 0-3 against the Chiefs and 21-1 against the rest of the NFL as a regular-season starting quarterback.

With Mahomes leading the way, the Chiefs (3-0) emphatically ended the Ravens’ 14-game regular-season winning streak while extending their own run to 12 games (including playoffs). Mahomes went 31 for 42 for 385 yards and averaged 6.5 yards on his four rushing attempts.

“They don’t give that guy a half-billion dollars for no reason,” Ravens defensive tackle Calais Campbell said. “He just made play after play. You’ve got to give him respect.”

Mahomes, who signed a 10-year, $503 million extension in July, gave the Chiefs their money’s worth on Monday night, surgically shredding a Baltimore defense that had allowed only two touchdowns in its first two games.

“You got to give credit to Pat for leading the charge. He stepped up big,” Kansas City coach Andy Reid said.

Mahomes was not intercepted, and avoided being sacked. The Chiefs led 27-10 at halftime and held on to defeat Baltimore (2-1) for the third year in a row.

“The plays we ran, we got in the right situations,” Mahomes said. “I thought guys executed at a very high level on those plays.”

In a duel between Mahomes, the 2018 NFL MVP, and the player who won that honor last year, Jackson was no match for the man whose resume also includes a Super Bowl MVP trophy.

Jackson completed 15 of 28 passes for 97 yards and ran for 83 yards, 30 of them on one carry during the Ravens’ opening possession. It wasn’t nearly enough against Mahomes, whose performance Jackson described in one word: “Outstanding.” 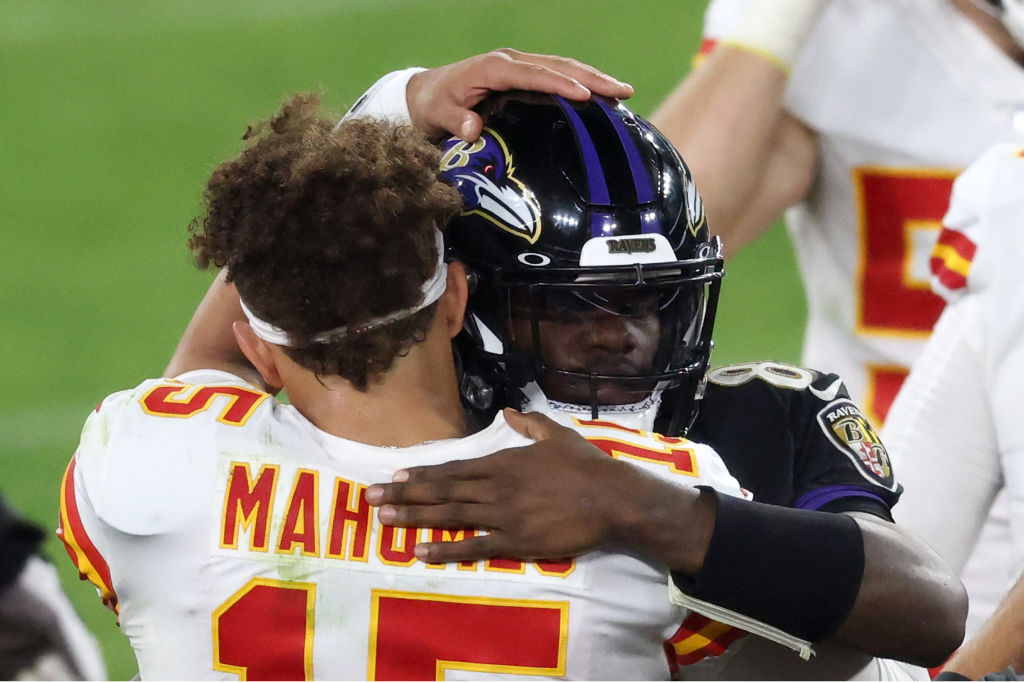 The Chiefs scored touchdowns on their first two possessions — one on a run by Mahomes, the other on a shovel pass to Anthony Sherman — for a 13-3 lead. Following that second score, Ravens rookie Devin Duvernay fielded the kickoff and sprinted down the right sideline for a 93-yard touchdown.

Kansas City followed with a three-and-out, but Baltimore simply could not contain Mahomes for long. After he got the ball back, Mahomes completed passes of 29 and 18 yards before hitting Tyreek Hill for a 20-yard score to cap a 73-yard drive.

A 49-yard touchdown pass from Mahomes to Mecole Hardman put the Chiefs up by 17 at halftime. The only other time Jackson trailed by that much at the break in an NFL game was last year, when the Chiefs held a 23-6 lead.

In this one, Kansas City pumped the brakes in the second half before Baltimore closed to 27-20. That’s when Mahomes showed why he’s the league’s highest-paid player and arguably the NFL’s best quarterback.

During a 13-play, 75-yard drive that produced the game-clinching score, Mahomes converted a third-and-5 with an 18-yard pass and ran for 12 yards on a third-and-10. He flipped a sidearm 12-yard pass to Sammy Watkins to set up a first-and-goal at the 2, from where Mahomes tossed a touchdown pass to appreciative tackle Eric Fisher with 8:14 remaining.

There were an estimated 250 people in the seats consisting of immediate family members of Ravens players, coaches and front office personnel. They were scattered in several sections behind the Baltimore sideline.

They were far more animated than the cardboard cutouts of people behind each end zone.

The Chiefs appeared to all stand on the sideline during the national anthem. The Ravens, on the other hand, offered a mixed bag of protests to call attention to social injustice: Some kneeled, including Jackson, some stood and a few others just sat on the bench.

Chiefs: CB L’Jarius Sneed was ruled out in the third quarter with a collarbone injury. … DE Alex Okafor (hamstring) was inactive. … G Andrew Wylie was inactive and went to the hospital with a stomach issue, but was OK, Reid said.

Chiefs: Host New England on Sunday. The Patriots are 2-1 with Cam Newton running the offense.

President Trump on players kneeling during national anthem: ‘I thought we won that battle with the NFL’

Trouble in Paradise: Wheels falling off Celtic’s shot at Scottish immortality
We and our partners use cookies on this site to improve our service, perform analytics, personalize advertising, measure advertising performance, and remember website preferences.Ok