Patriots head coach Bill Belichick shared his thoughts Thursday on Bills safety Damar Hamlin, who has shown “substantial improvement”, per doctors at the University of Cincinnati Medical Center, and remains in intensive care after suffering a cardiac arrest during Monday night’s game against the Bengals.

Watching the frightening events in Cincinnati brought the veteran coach back to another scary injury that occurred a little more than 25 years ago.

Belichick was the Jets’ defensive coordinator in 1997 when they traveled to face the Lions. A game that was supposed to be a celebration for the Lions, with the team on the verge of a playoff appearance and Barry Sanders just a few yards shy of 2,000 rushing, turned tragic and shocking in an instant.

Second-year Lions linebacker Reggie Brown made a tackle on Jets running back Adrian Murrell, and by all appearances it was a normal football play — similar in that way to what happened on Monday night. Suddenly, Lions players knew something was wrong: Brown couldn’t move and was having trouble breathing. Soon, he was unconscious.

Within moments, the entire Lions team was kneeling by Brown’s side and the packed Silverdome crowd fell silent. Brown required CPR, which saved his life. The spinal-cord injury Brown suffered that day ended the then-23-year-old’s NFL career.

“It was a very chilling game, one that I’ll obviously never forget,” Belichick said during his Thursday press conference. “I’ve been to a lot of games, but there are some that there’s a moment that sticks out and that would be one of them.”

Seeing Hamlin collapse on Monday certainly unsettled players and coaches around the NFL, the Patriots and Belichick included.

“Again, from talking to other people that are in this league or have experienced it — something like this, they’re all different, I’m not saying anything is the same. But it’s just a very – I don’t think there’s any easy answer to it. You just deal with it the best that you can.”

Belichick, whose Patriots (8-8) are scheduled to play the Bills (12-3) in Buffalo on Sunday, knows there are some things bigger than football.

“Football is a very great and competitive game,” he said. “Unfortunately, injuries and things like this can and do happen from time to time. It’s very unfortunate. It seemed like the care that was given was very prompt and good. I’m thankful for that. But life’s bigger than this game. It’s just one of these humbling moments for all of us that stands out.” 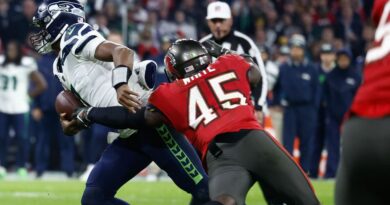