Home » NFL » Peyton Manning swears on Manningcast after not knowing mic was on: ‘I can’t hear s—’

It might not have been the double birds, but Peyton Manning delivered a less-than-PG moment on ESPN2’s Monday Manningcast.

During “Monday Night Football with Peyton and Eli,” Peyton Manning was asked by his brother Eli to break down the Rams’ first-quarter touchdown pass from Matthew Stafford to Odell Beckham Jr., which gave LA the lead against the Cardinals. The only thing that broke down, apparently, was his microphone.

When the broadcast returned from the next commercial break, Manning said that he was so excited by the fade route run by Beckham that his mic broke.

Eli Manning was planning on asking a question to the first guest on the broadcast, former Cardinals receiver Larry Fitzgerald, but broke away to ask his brother to dissect the play.

“Before we do that, Larry, let’s go to Peyton, he’s going to break down that touchdown,” Eli Manning said. Then came Peyton’s profanity, followed by Eli improvising with “Never mind.”

The Manning brothers, while delivering NFL fans a fun alternative to the traditional ESPN “Monday Night Football” broadcasts this season, have not always delivered the most family-friendly moments. Eli Manning demonstrated the double middle fingers that Eagles fans flashed him when he played in Philadelphia.

He apologized for the gesture during the broadcast.

Monday’s broadcast will be the final Manningcast of the 2021 season, and the only one in the playoffs. Along with Fitzgerald, actor Dwayne Johnson and Seahawks quarterback Russell Wilson are set to be the guests during the game. 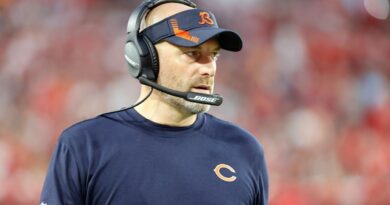 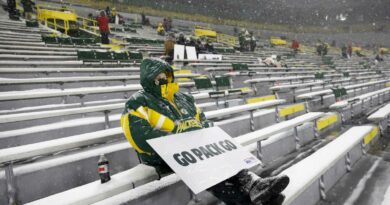 NFL home field winning percentage reached an all-time low in 2020. What does that mean for the playoffs?