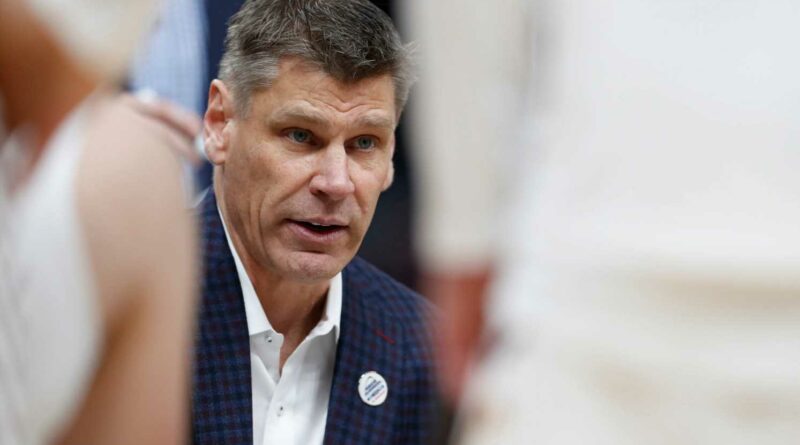 Now, he’ll return, this time in crimson and cream as the Sooners coach, according to multiple reports.

Moser, 52, has spent the last 10 seasons at Loyola Chicago, taking the Ramblers to two NCAA Tournaments including the 2018 Final Four and this year’s Sweet 16.

Moser's decision to accept the job was first reported by the Chicago Sun-Times.

Now, Moser takes over for Kruger, who retired last month after 10 seasons with the Sooners, posting a 195-128 record with seven NCAA Tournament appearances including a 2016 Final Four run.

Loyola became the darlings of the 2018 tournament with a series of upsets as the No. 11 seed, beating six-seeded Miami, third-seeded Tennessee, seventh-seed Nevada and ninth-seed Kansas State to reach the Final Four. Their first three wins came by a combined four points.

The Ramblers became a sensation as much for their then-98-year-old team chaplain and super fan Sister Jean as their unlikely performance.

Sister Jean was once again in attendance this season as the Ramblers made their run to the second weekend with an upset of top-seeded Illinois in the second round.

Loyola dominated that win over the Fighting Illini, leading wire-to-wire and winning 71-58, the largest margin of victory for an eight or nine seed over a No. 1 seed in the tournament in 35 years.

Moser’s success at Loyola has been largely based on defense and being patient and finding good shots.

The Ramblers were second in Division I in adjusted defensive efficiency this season (first among NCAA Tournament teams), according to KenPom.com.

That defensive tenacity combined with their deliberate pace — KenPom has the Ramblers in the bottom 20 of nearly 360 Division I teams in both adjusted and raw tempo this season — helped put Loyola first in scoring defense this season at 56.1 points per game allowed.

After leaving Illinois State, Moser spent four seasons as an assistant at Saint Louis before being hired by Loyola in April 2011.

Moser grew up in the Chicago suburb of Naperville, playing collegiately at Creighton. The guard started 27 of his 102 games with the Bluejays, averaging 4.6 points.