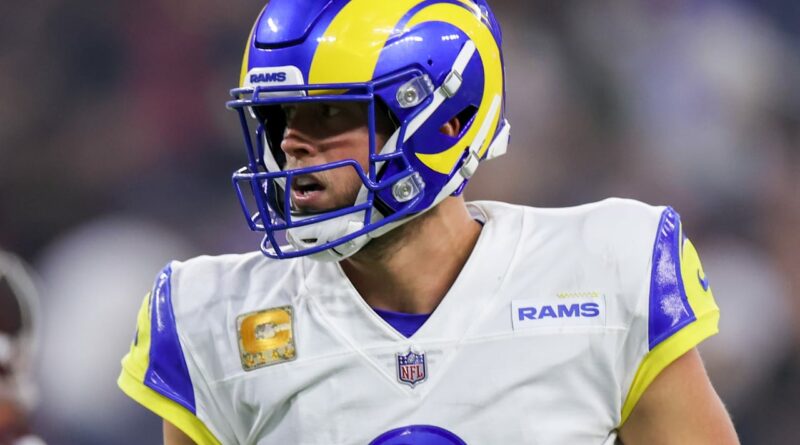 INGLEWOOD, Calif. — Everything Sean McVay said after Sunday night’s 28-16 loss to the Tennessee Titans in SoFi Stadium was correct: He didn’t coach a good game; it’s tough to get into a flow with 12 penalties for 115 yards; the Titans did a nice job overall and particularly in some one-on-one pass-rush situations.

Here’s what he did not say that he could have said: A disturbing pattern is developing with his offense.

The unit is a thing of beauty when able to play with pace and have the down and distance in its favor. Points are as plentiful as Southern California sunshine on those occasions. But the sky turns gray when matched against physical defensive fronts that are complemented by speed and coverage ability on the backend. In those instances the offense — and the pass protection, in particular — can give the appearance that it is overmatched.

We saw it in the first two quarters Sunday, when defensive tackle ﻿Jeffery Simmons﻿ became just the second player since 2016 to have six quarterback pressures and three sacks in a single half, once putting guard Austin Corbett on roller-skates and bull-rushing him into ﻿Matthew Stafford﻿. We saw it earlier this year in a 37-20 loss to the Cardinals when the unit followed a solid first quarter by being held to a field goal over the next 43-plus minutes. We saw it last season in the 32-18 playoff defeat to the Packers when it gave up four sacks and converted on just 2-of-8 third downs. And we saw it three seasons ago in the 13-3 Super Bowl loss to the Patriots.

There is the growing perception that the more physical and muddy an opponent makes the game, the less the Rams like it. Their offense is about motion and misdirection and creating advantages by making defenders a half step slower while processing all that they are seeing. But that potential edge vanishes if opponents are able to change the line of scrimmage and get upfield, as the Titans consistently did in passing situations.

“I don’t think it’s (an issue),” McVay said of his unit being physically overwhelmed. “Tonight the Titans did a great job in some isolated instances. If it was one matchup that you felt like continued to show itself, then you’d say, Alright, maybe that’s a concern. But when you’re playing behind the sticks you become one-dimensional like we were. That’s tough versus any defensive front, especially a team that’s good like they are.”

Left tackle ﻿Andrew Whitworth﻿ was even less willing to accept that line of thinking when cast in his direction. He said the issues in pass protection had to do more with the Titans playing coverage to prevent big pass plays and the ball not coming out quickly.

“When you play in these games and teams are going to play coverage, it’s a battle,” he said. “Sometimes the ball gets out and sometimes it doesn’t. I wouldn’t say I agree very much about the physical part because we were running the ball really well. I thought some of the sacks they had were more late coverage type situations where, for whatever reason, up front we weren’t as clean as we wanted to be and weren’t able to get the ball out and weren’t able to get open. You have games like that, that’s the reality. You come back and you approach it the same way and you hope it works out better the next time.”

Stafford echoed his lineman’s assessment, saying he held the ball too long at times in hopes of a big play. He was sacked five times and finished 31 of 48 for 294 yards with one touchdown and two interceptions, which came on back-to-back plays in the second quarter. The first set up a short touchdown pass from Ryan Tannehill to Geoff Swaim and the second was returned 24 yards for a touchdown and 14-3 lead by safety Kevin Byard.

The outcome appeared a fait accompli with 2:10 to go in the first half when Tannehill scored from the 1 for a 21-3 lead. It was quite a showing for a team looking to make the statement that the whole is greater than one part.

Playing without All-Pro running back Derrick Henry for the first time since he broke a bone in his foot, they knew there were doubts about how well the offense would function. Fact is, few offenses are as closely associated with — or as singularly built around — one individual as the Titans are with Henry, a massive man whose sprinter’s speed is matched only by his physicality. When he’s in the lineup, everyone knows the football is going to him and yet it doesn’t matter. The reigning two-time league rushing champion was going to get his while creating opportunities for others in the passing game.

That said, it would be foolish to even hint that the Titans offense can be as productive without Henry; you simply don’t replace a guy like him. But the hope is that they can get the job done by committee with newcomers Adrian Peterson and D’Onta Foreman and third-down back Jeremy McNichols. Peterson and Foreman were signed during the week, and to some surprise Peterson, a future Hall of Famer, got the start and most of the work early.

it’s fair to say he looked like someone in a new offense who had not played since last season. He ran high and was not as decisive as normal, finishing with 21 yards on 10 carries. But his presence was a factor.

Defenders were so concerned about him that on two of the Titans’ touchdowns they bit on fake handoffs and left the opposite side of the formation wide open, resulting in Tannehill’s throw to Swaim for a 2-yard score, then his 1-yard touchdown on a bootleg.

It was a significant victory for the Titans in that it showed they remain a threat to reach the Super Bowl even without Henry. They are now 7-2 overall and 6-0 against playoff teams from last season. Their last four games are wins over the Rams, Colts, Chiefs and Bills, each of whom came in on a hot streak. It’s safe to say we know who they are. The Rams are another question. There are questions that have to be answered.

They have gone all-in this season, starting with the offseason trade for Stafford and most recently including the trade for Broncos edge rusher Von Miller, who did not play Sunday. it is not hyperbole to call this a boom or bust season. McVay and Whitworth expressed confidence the team would rebound a week from Monday against the 49ers. In the locker room afterward, the veteran tackle told his teammates: “Kids pout, men respond.”

And respond the Rams (7-2) might. But questions about their ability to match up against certain types of teams are likely to linger well past their next game. They figure to be there in the postseason as well.

Did Vikings’ dud in divisional round expose deeper problems? They aren’t in the mood to discuss 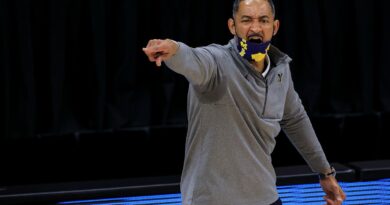 For coach Juwan Howard, experience in NBA boosted him to early success at Michigan

How conference title games could inject chaos into CFP rankings