The Las Vegas Raiders made a $1 million donation to the Uvalde Consolidated Independent School District in the wake of the tragic school shooting in Uvalde, Texas.

The funds are intended to fortify security at schools within the district by installing impenetrable doors and an unscalable fence while also installing cameras inside and outside.

“We are proud to be part of something to make the children in these schools safer,” Davis said, via the Uvalde Leader-News. “Two weeks ago, I had a conversation with Vann. He told me about the hurt his hometown was going through. Vann told me that he had a grandson attending public school. He said his family thought about having him go to a private school next year, but he wanted him to attend public school as Vann and his son had done growing up in Uvalde. He said that Uvalde was in pain and needed help. I asked him what we would do to help ease that pain.”

On May 24, an 18-year-old gunman killed 19 children and two adults as he went from classroom to classroom at Robb Elementary School in Uvalde, adding to a gruesome, yearslong series of mass killings at churches, schools and stores. 10 people were killed by a gunman at a grocery store in Buffalo on May 14.

The tragedy in Uvalde was the deadliest school shooting in Texas history, and it added to a grim tally in the state, which has been the site of some of the deadliest shootings in the U.S. over the past five years.

“In all the years that I played for the Raiders, this organization took care of me and my family, and has looked out for the players and all members of the Raiders family,” McElroy said. “This all began with Mark’s dad, Al Davis, who was a leader and an innovator in the National Football League. The Raiders organization has a proud tradition of doing for other people in need. I know that Al would be proud of this contribution made by Mark and the organization today.”

Several NFL teams have made donations to support the Uvalde community in recent weeks. During OTAs, many NFL players have sported orange shirts on the practice field in support of Uvalde and to raise awareness of rampant gun violence in the United States.

“We thank Mr. Davis and the Raiders organization for this very generous gift. Vann is a life-long friend and a huge part of Uvalde,” Harrell said. “We will put this money to good use. This contribution should go a long way in making our schools safer.”

I told ya’ll so! Jalen Hurts should be the Eagles starter

Aaron Rodgers’ history vs. 49ers, from fandom to NFL Draft snub to playoffs 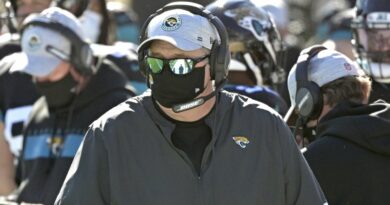