The football team from Sin City committed a cardinal sin on Sunday afternoon.

The Raiders did something that’s viewed as pretty disrespectful by old-school folk and football blowhards: Prior to the coin toss in the Raiders-Chiefs matchup, the Raiders took their pregame huddle to midfield, where a chorus of boos rained down on them.

They were there for a grand total of about 10 seconds before they scurried off the field.

Of course, players are always tempting fate when they do weird things like this, so consider what happened next as utterly unsurprising: Just 17 seconds into the game, the Chiefs recovered a Josh Jacobs fumble for a scoop-n-score, giving KC a swift, 7-0 lead early on.

The Chiefs haven’t entirely hit their stride offensively yet, but they’re on a five-game winning streak with a defense that’s been playing lights out. The Chiefs also demolished the Raiders in mid-November, with a 41-14 win over Vegas in Allegiant Stadium.

Patrick Mahomes found Darrel Williams for another score in the late first quarter, lengthening KC’s lead to 14-0 early on. The Chiefs built a 28-0 lead before halftime.

Let this be a lesson, kids: Don’t dance on your opponent’s logo, or huddle, or whatever. 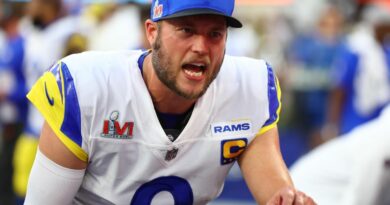