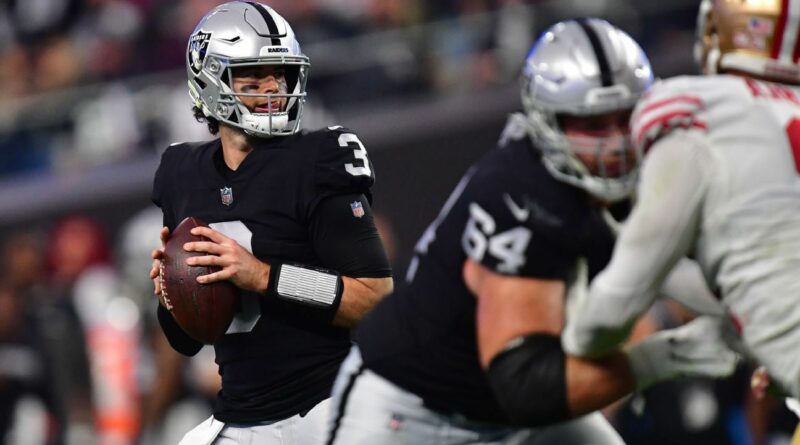 LAS VEGAS — Jarrett Stidham, fresh off his first career start in which he passed for 365 yards and three touchdowns, gathered his Las Vegas Raiders teammates and apologized.

He was sorry for not being able to finish off the San Francisco 49ers and their No. 1-ranked defense in the Raiders’ 37-34 overtime loss at Allegiant Stadium on Sunday.

“I think every single person on the team said, ‘Man, get out of here with that. You balled out and you did your thing,'” said Raiders receiver Davante Adams, who was on the receiving end of seven Stidham passes for 153 yards and two touchdowns.

“We’ve got to find a way to help him — protect a little longer, catch a few more balls and get a few more first downs, a few more points, and it could have been a dream situation for him, too.”

Such was the bittersweet feeling in the Raiders’ locker room after they fell to 6-10 with their fifth blown lead of at least 10 points — they led 24-14 in the third quarter — to be officially eliminated from the playoff race.

Because while Stidham was also picked off twice — the first on a batted ball at the line of scrimmage, the second in OT when he was bumped by left tackle Kolton Miller as he was bull-rushed into the quarterback by Niners defensive end Nick Bosa and Stidham’s deep shot to Adams down the left sideline fluttered harmlessly into the waiting arms of safety Tashaun Gipson — he earned the respect of a roster that had known only Derek Carr as the starter.

Carr, the team’s starter since his rookie season of 2014, was benched on Wednesday and, by mutual decision, is staying away from the team the final two weeks of the season.

But while Carr never looked truly comfortable in first-year coach Josh McDaniels’ system, it’s the only NFL scheme Stidham, acquired in a May 13 trade with McDaniels’ old employer, the Patriots, has known since being drafted by New England in 2019.

“When everybody was just learning things — what does this word mean? what does that word mean? — Jarrett … was pointing guys in different directions and was operating with confidence back then,” said Waller, who caught three passes for 72 yards, including a 24-yard TD.

“So, he knows everything — [the playbook] didn’t have to be watered down or simplified [Sunday]. He could hop right in and do everything we’ve been doing.”

Stidham became the second QB since the start of 1950 with at least 350 passing yards and three passing touchdowns in his first career start, alongside the New York Jets’ Mike White in Week 8 of the 2021 season against the Cincinnati Bengals.

Stidham finished with 122 more passing yards than any other Raiders QB making his first career start, eclipsing the 243 yards Todd Marinovich threw for against the Kansas City Chiefs in the 1991 regular-season finale.

Those Raiders also lost that day.

“I just wanted to go out there and play free today,” Stidham said. “Try and facilitate the offense and [find] a way to win. We just fell short a little bit.

“Tough to end that way, but we’ve got another week here that we’re all on the same page on how we need to finish the year.”

McDaniels, meanwhile, said he did not alter his game plan much in making the switch from Carr to Stidham.

“Whoever plays quarterback for us is going to have the same opportunity,” McDaniels said of changing calls at the line. “If they learn the system and understand how to use it, they had the same opportunities. We didn’t really call the game radically different today than we would have otherwise. And I thought Jarrett took advantage of the opportunities that were presented to him.”

With Carr all but gone for next season, rumors have begun that McDaniels and general manager Dave Ziegler, who also came from New England, will pursue another veteran QB already familiar with the system.

But while the Tom Brady and Jimmy Garoppolo storylines will heat up, Stidham might have given the front office something else to chew on.

“He balled,” said Raiders running back Josh Jacobs, the league’s leading rusher with 1,539 yards. “He balled, man. He was calm and collected in the huddle … you couldn’t tell he was a backup, for real.

“That’s one of the best defenses, if not the best defense in the league, so for him to go out there and do what he did, I feel like that’s speaking to his campaign as ‘The Guy.'”

The Raiders’ defense was impressed as well.

“Jarrett played his ass off,” defensive end Maxx Crosby said. “Dude is a competitor … looking forward to him playing his ass off next week, too.

“You see a guy like him, super fired up and getting hype and talking his s—, it’s cool. Yeah, I’ve got a ton of respect for him.”

It’s just one game of a lost season — the Raiders were expected to return to the playoffs after finishing 10-7 last year and making upgrades to the roster and changing regimes. But Stidham’s performance, beyond his ability and willingness to extend plays with his legs and roll out and take hits, also won over his teammates.

Like on the big shot he took from Talanoa Hufanga and Samson Ebukam on his 60-yard TD pass to Adams, one of Carr’s closest friends since their college days at Fresno State and a major reason the receiver came to Las Vegas.

“He came and greeted me on the sideline with blood between his teeth. That’s what you want out of your quarterback. I’m really proud of him. He’s a tough guy, man. He’s not the biggest dude and he sticks in there. He’s going to look for his guys and he’s going to find a way to get it done.”