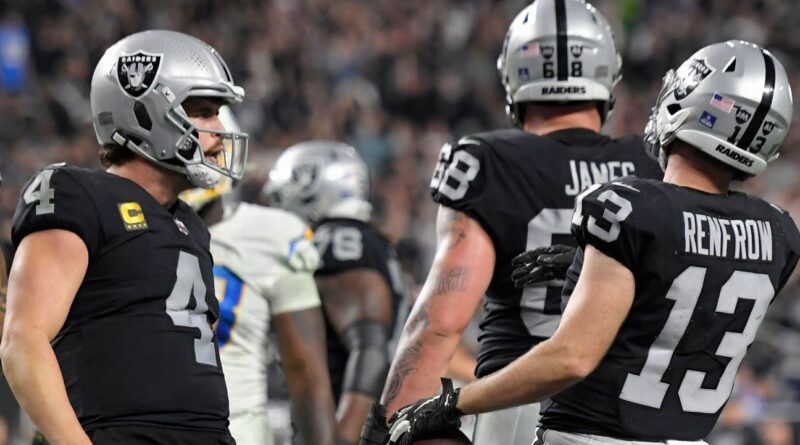 LAS VEGAS — The Raiders, after a season filled with an unusual amount of turmoil and adversity, are headed to the playoffs for the first time since 2016, just their second postseason appearance since playing in Super Bowl XXXVII following the 2002 season.

A white-knuckle 35-32 overtime victory against the AFC West rival Los Angeles Chargers on Sunday night at a raucous Allegiant Stadium clinched a wild-card spot for the Raiders and the No. 5 seed in the AFC.

A 47-yard field goal from Daniel Carlson with no time on the clock in OT — after the teams traded field goals to start the extra period — ended the game. It was the Raiders’ record sixth walk-off win of the season, the most since the 1970 AFL-NFL merger.

“They don’t blink; they reset. They recover quickly.”

The Raiders will be the fourth playoff team to have a different coach in the postseason than in their season opener, with Bisaccia joining the 1961 Houston Oilers (Wally Lemm), the 1952 Los Angeles Rams (Hamp Pool) and the 1942 Chicago Bears (co-coaches Hunk Anderson and Luke Johnsos), according to Elias Sports Bureau research.

Bisaccia acknowledged the Raiders did have conversations about settling for a tie, which would have gotten both the Raiders and Chargers into the postseason.

“We ran the ball there [near the end of OT], and they didn’t call timeout,” Bisaccia said. “So I think they were probably thinking the same thing.”

But a 10-yard Josh Jacobs run to the Chargers’ 29-yard line set up Carlson.

“We were going to take the field goal and try to win it,” Bisaccia said. “But we were certainly talking about it on the sideline.”

Asked why he took a timeout with 38 seconds to play in OT, Chargers coach Brandon Staley explained, “We needed to get in the right grouping; we felt like they were going to run the ball, so we wanted to get our best 11 personnel run defense in. Make that substitution so that we could get a play where we would deepen the field goal.”

In fact, Carlson missed as many FGAs as PATs this season.

The Chargers, who became the first team in the past 30 seasons to convert on fourth down six times in a game, forced overtime by scoring 15 points in the final 4:28 of regulation, including the game-tying touchdown and PAT with no time on the clock.

The Raiders experienced a tumultuous regular season, from coach Jon Gruden’s resignation to wide receiver Henry Ruggs’ DUI and fatal car crash to cornerback Damon Arnette being released after making death threats in a viral video to even last week, when rookie cornerback Nate Hobbs was arrested for DUI.

Las Vegas lost five of six games coming out of its bye week but rebounded to win four straight to close the regular season and advance to the playoffs.

Carr, a second-round pick in 2014 who owns virtually every passing record in franchise history and set a new single-season passing standard Sunday night, will play in his first career postseason. He suffered a broken right leg in the penultimate game of the 2016 season, when the Raiders, then calling Oakland home, finished 12-4. The Raiders’ playoff stay was short-lived then, with a 27-14 loss at the Houston Texans.

“I’m excited, thinking about the next team we play, and then everything hurts,” said Carr, who passed for 186 yards and two touchdowns while completing 20 of 36 attempts. “I just have this weird feeling in my heart like, ‘The job’s not done.’ Like my favorite player, Kobe [Bryant] said, ‘Job’s not done.’

“It feels cool, it’s awesome, but … we’ve got to play a team that already beat us. So it’s going to be tough.”

Carr had the third-most regular-season starts at QB without a playoff start in the Super Bowl era (127), behind Ryan Fitzpatrick (147) and Archie Manning (139).

Jacobs referred to himself as the “closer” for the Raiders and implored offensive coordinator Greg Olson to give him the ball after the Chargers kicked a field goal to tie the game in overtime.

“I said, ‘It’s time,'” said Jacobs, who rushed for 23 of his career-high 132 yards in overtime while playing through a rib injury that had him listed as questionable on the injury report. “We collectively came together, the offensive line, DC, everybody. And we just made it happen.” 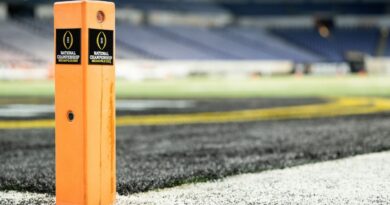