The purge continues in Oakland.

Nearly two weeks after trading Amari Cooper out of town and four days after the trade deadline passed, the Raiders are parting ways with yet another veteran figure. Oakland announced Saturday that it waived defensive end Bruce Irvin. The Athletic’s Vic Tafur first reported the news.

Irvin had one year remaining on a four-year contract signed with the organization in 2016, but Oakland owes him nothing after this season.

"I know he’s frustrated. I’m frustrated," Raiders coach Jon Gruden said of Irvin following the game. "We’ll try to solve that as soon as possible. He’s a good player. He’s a good player." Gruden added that Irvin’s role was reduced because as an "edge rusher," Irvin didn’t fit in Oakland’s base 4-3 defense.

The pass rusher exits with three sacks, four QB hits and one forced fumble on the season.

Irvin’s unceremonious exit is the latest in a slew of much criticized transactions made by Gruden since he was handed a 10-year, $100 million contract in January. Gruden played hardball with All-Pro defensive end Khalil Mack and eventually shipped him to Chicago for two first-round picks. Gruden did the same thing with Cooper, who was traded to Dallas in late October for a first-round pick.

Unlike those roster moves, the Raiders reap nothing from releasing Irvin, which comes just days after the trade deadline. NFL Network’s Tom Pelissero reported Oakland was willing to take a late-round draft pick in exchange for Irvin, but the end’s remaining $3.7 million salary proved to be a roadblock to acquiring that compensation. Given that, Pelissero reports Irvin is likely to clear waivers and become a free agent.

Irvin could be a boon to a contender in need of pass-rushing help. Already one of his former teammates is on the lookout. 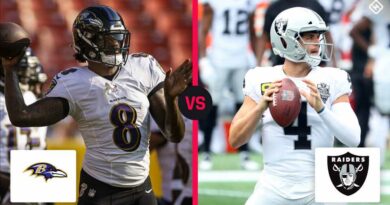 What channel is Ravens vs. Raiders on today? Schedule, time for ‘Monday Night Football’ in Week 1