Ten Las Vegas Raiders players have been fined by the NFL for violating COVID-19 protocols while attending an indoor charity fundraiser, a person with knowledge of the situation told USA TODAY Sports' Jarrett Bell. The person spoke on condition of anonymity because they were not authorized to reveal the punishments.

NFL Network was first to report the news.

Tight end Darren Waller, who organized the event to raise money for young people fighting drug and alcohol addiction, received the highest fine — $30,000 — while quarterback Derek Carr, tight end Jason Witten and wide receiver Hunter Renfrow were among nine others who were fined $15,000.

"We should have kept the masks on, even if we are coming in and they're introducing us," Carr said afterward. "I was just there trying to support Waller. That's what me and the guys were trying to do."

The city of Henderson fined DragonRidge Country Club, which hosted Waller's event, $2,000 for four violations, including the lack of masks and hosting more than 50 people at an event.

This marks the third set of fines related to COVID-19 violations connected to the Raiders in the past two weeks.

The team was fined $50,000 for allowing an unauthorized team employee into the locker room following a Sept. 21 game against the New Orleans Saints.

In addition, Jon Gruden was fined $100,000 and the team was docked $250,000 for after the head coach did not properly wearing his mask on the sidelines during that same Week 2 game. Four other NFL coaches were fined for the same reason after the NFL issued a warning following several Week 1 violations. 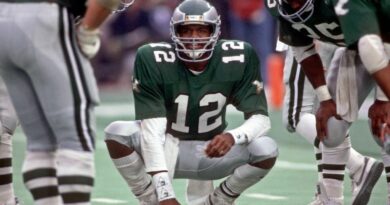 Eagles to bring back Kelly green alternate uniforms in 2023