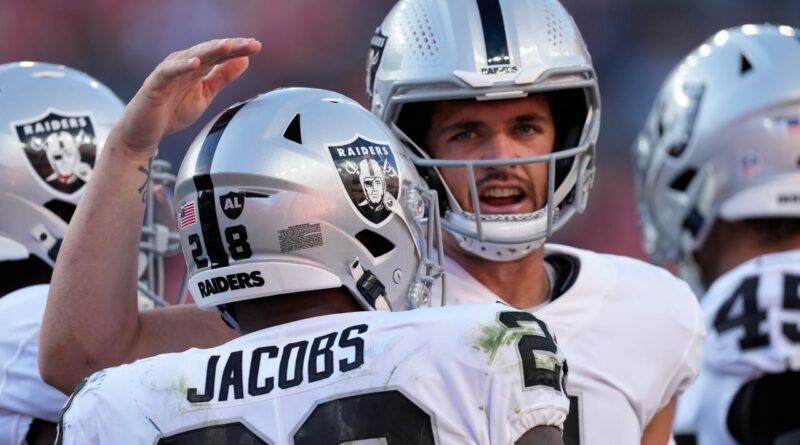 The Raiders have had a lot of memorable moments in their storied 61-year history. Some are legendary enough to have their own monikers — think The Sea of Hands, Ghost to the Post, Immaculate Reception and Holy Roller. Other games are unforgettable because of the circumstances, such as in 2011 when the Raiders beat the Texans one day after the passing of franchise patriarch Al Davis. Leading by five with six seconds to play and Houston five yards from the end zone, Michael Huff intercepted Matt Schaub even though the Raiders had only 10 defenders on the field. Legend has it that the 11th defender was Davis in spirt.

Years, if not decades, from now, the Raiders’ 34-24 victory over the Broncos on Sunday in Denver likely will occupy a noteworthy spot in franchise lore if only because the organization had never experienced anything like it.

The week began with Jon Gruden — the coach whom owner Mark Davis emotionally credited with fulfilling his professional dream by returning to the franchise 17 years after being traded to the Buccaneers — resigning in disgrace after The Wall Street Journal and New York Times published articles disclosing Gruden’s use of racist, homophobic and misogynistic terms in emails he wrote dating back to 2010. The week ended with arguably the team’s most complete performance of the season, despite offensive coordinator Greg Olson calling plays for the first time in five years and Rich Bisaccia, a 61-year-old football lifer, walking the sideline as a head coach, albeit an interim one, for the first time in 20 seasons as an NFL coach.

From the outside, the situation appeared incredibly challenging, to say the least, for a team coming off back-to-back losses in which the offense seemed to be regressing. But the Raiders (4-2) showed the type of resilience and character that could bode well for them the rest of the season, which was top of mind all week. They told themselves that 12 games remain to be played. They could bond and fulfill their personal expectations or break and succumb to a sixth consecutive non-winning season.

“It for sure brought us closer,” quarterback Derek Carr told reporters after Sunday’s victory. “Talking with the guys in meetings and that type of stuff, I’m proud of where we’re at and glad for our organization to get a win. We needed a win bad this week. Sometimes when you get punched in the gut it’s hard to bounce back.”

The Raiders did more than bounce back; they excelled. They led 17-7 at the half, 24-7 in the third quarter and 34-17 midway through the fourth quarter. They were in complete control thanks to contributions across the roster. For instance:

“We came out here and we wanted to get the win for Coach Rich,” Crosby said in a postgame press conference. “We wanted to just go out there and play great football and I feel like we did that. … In this business, there’s always crazy things going on, especially with the Raiders. There’s no mistake about it; ever since I got here there’s always things going on. But these guys that we have in this building are resilient, from the coaching staff to the players to the trainers. Everybody has a great, positive outlook. … Everyone (outside) was talking about, ‘oh, what are the Raiders going to do? Is the season over?’ We heard all of it. For us to have a great week of practice and go out there and play good football, it’s just a testament to all these guys in the locker room. I couldn’t be more proud of them.”

There’s no question this was a trying time for the franchise. Davis had tried on multiple occasions to lure Gruden from the broadcast booth, and when he finally succeeded in 2018, he gave his friend complete control of football operations and a 10-year, $100 million contract.

Gruden methodically went about remaking the franchise in the image he desired, from personnel acquisitions to practice schedules to play-calling. So imagine the shiver that went through the building when he resigned on Monday evening. Typically, teams break or bond in that situation, and the Raiders refused to do the former.

Olson took over the offensive play-calling for Gruden and immediately set out to establish more of a presence on the ground, which then opened the passing game. Afterward, he texted that it was the “toughest week of my career — by far!!” but added that getting back on the play-calling horse was “a little easier with the skill players we have!!”

Defensively, coordinator Gus Bradley sought to shut down the Broncos’ running game and force them into obvious passing situations. The strategy worked beautifully and resulted in five sacks and three interceptions (two more than they had for the entire season entering Sunday).

But much of the credit rested with the players. The moment was a test to the leadership within the locker room, a point that was relayed to Carr the morning after Gruden resigned. Raiders great Charles Woodson phoned him and left no doubt what needed to take place.

“My feeling was that his voice has got to be the loudest in the building,” Woodson told me Sunday night by phone. “He’s been through multiple head coaches and offensive coordinators; he’s been through a lot during that time so he’s seen a lot and been weathered in this game. So I felt like if anybody was going to be able to handle that situation, it’s going to be him. They were words of encouragement to be a leader, be the loudest voice in that locker room. You’ve got to get this win. Be 1-0. Really, I was just trying to be supportive. It was a weird moment for him, the team and Raider Nation. It was kind of shocking how it all went down.”

We no longer have to wonder whether the Raiders have the mettle to withstand that shock. Sunday showed us the question now is how far can such fortitude carry the team.