The Las Vegas Raiders are signing tight end Darren Waller to a three-year, $51 million contract extension, NFL Network Insider Ian Rapoport reported Saturday, per a source. The team has since announced the news.

“Darren Waller is an exemplary teammate in every way, and we’re excited to see him continue to grow as a leader on this team,” said Raiders coach Josh McDaniels, via the team website. “Darren brings a tremendous commitment and work ethic to the building every day and we couldn’t be more thrilled that he will be a part of the Raiders Family for years to come.”

Waller is receiving the new deal he sought at the beginning of training camp one day ahead the Raiders’ first game of the 2022 season. Rapoport adds that Waller had two years remaining on his contract before the extension. 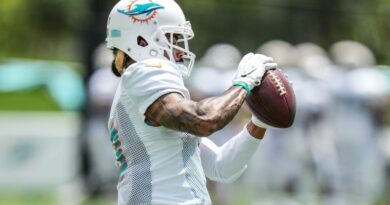 ‘Illinois and the Big Ten is home for me’: Bret Bielema to take over Illini football