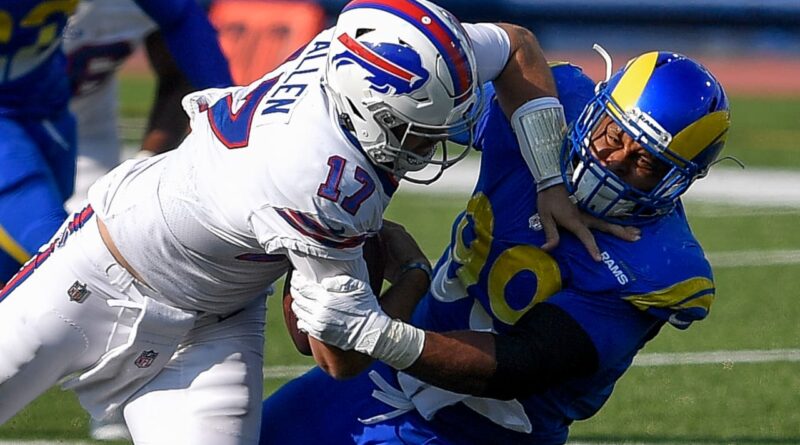 Voters haven’t yet fatigued of recognizing Aaron Donald as the most dominant defensive player in the NFL.

The Los Angeles Rams defensive tackle took home his third AP Defensive Player of the Year award in the past four seasons, as announced during Saturday’s NFL Honors ceremony.

In 2020, Donald continued his dominant ways. The pocket-crumbler generated an NFL-high 76 quarterback pressures, including playoffs, per Next Gen Stats. He finished second in sacks with 13.5.

The 29-year-old is a menace for quarterbacks, tossing aside blockers to antagonize signal-callers. Unfortunate was the offensive lineman tasked with blocking him one on one, as most of those instances ended disastrously for the offense.

Donald finished fourth in sack-rate (2.9%) among all players with at least 200 pass-rush snaps, including playoffs. Given that most of his snaps come from the interior — where it’s easier for offenses to double team and send extra help — that figure remains ridonkulous compared to his contemporaries on the edge.

It’s not just that he gobbles up QBs and destroys pockets, Donald wrecks plays and allows others on his squad to earn tackles and sacks. There is no greater threat to a quarterback than Aaron Donald when the ball is snapped.

Donald’s 85.5 career sacks rank third-most in a player’s first seven seasons since the NFL began tracking individual sacks in 1982. Only Reggie White (110.0) and DeMarcus Ware (99.5) had more in the same span. Donald is making his hay inside at a rate never before seen.

Hall of Fame QB Troy Aikman heaped the highest praise possible on Donald during the Rams’ wild-card win over Seattle:

“I played against Reggie White, I played against Lawrence Taylor,” Aikman said. “I gotta tell you, this Aaron Donald is the best defensive player that I’ve ever seen. He’s really remarkable — he should be the NFL Defensive Player of the Year, and I think he should be getting some votes for MVP of the entire league. He’s that good.”

Win another DPOY award, Donald did.

Donald was the best defensive player on the No. 1-ranked defense in the NFL during the 2020 regular season. More than most seasons, L.A. moved Donald around the formation to get advantageous matchups. It worked with aplomb in Brandon Staley’s only season as defensive coordinator with the Rams.

A postseason rib injury sapped the superhuman force from Donald in the Divisional Round. If anything, his place as the best defender in the league was proven in that game. Sans a full-strength Donald, the Rams D had its worst performance of the year.

When healthy, no one disrupts an offense like Aaron Donald﻿. No one.