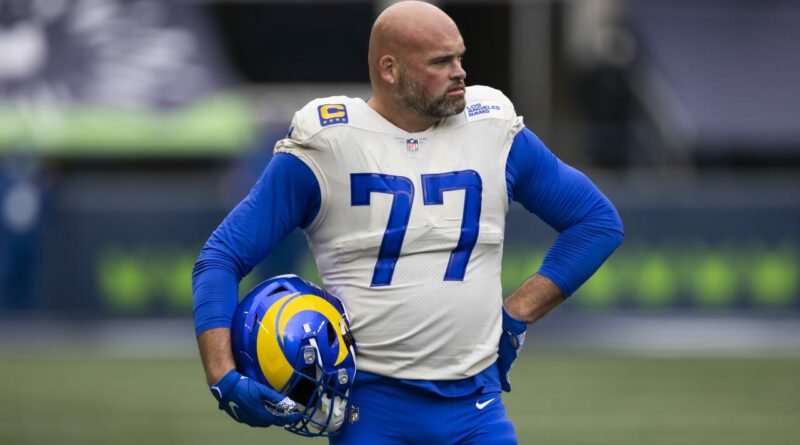 Football is a game of emotions, and Andrew Whitworth isn’t shy about showing them. As the oldest player on the Rams, he feels it’s his duty to lead by an expressive example.

It’s a ride that might not be over soon. Whitworth told NFL Network’s Steve Wyche and Jim Trotter on the latest episode of the Huddle & Flow podcast that he’s motivated to take snaps at 40 years old and thus plans to play next season. It would put him in rarified air. Few linemen have done it in the annals of the NFL, and the last was Hall of Famer Bruce Matthews in 2001.

Whitworth, who’s contemplated retirement in the past, said the bigger decision for him this offseason will be whether he wants to continue his journey with another team, should the Rams choose to cut ties after giving him a lucrative three-year extension last March.

“It’s less about coming back and more about, are you willing to go play somewhere else, if that’s what has to happen?” Whitworth said.

Of course, Whitworth and the Rams currently have unfinished business to tend to. After handing the Seahawks their first home playoff loss in 16 years, L.A. now must travel to Green Bay this weekend to take on the top-seeded Packers.

“That’s when the emotions have to come out and Big Poppa has to get his guys going,” Whitworth said.

The two-time All-Pro is feeling less emotional these days now that he’s back on the field. Whitworth missed the last seven games of the regular season with torn knee ligaments. His hope was that he’d be back for Week 17, which the Rams entered without a playoff spot locked up. When Whitworth couldn’t go, he felt personal defeat.

“I was just real emotional before that game because I was like, if we lose, I’m going to feel like I failed a little bit because my goal was to get back and help us get to the playoffs or play in the playoffs,” Whitworth said.

His teammates took care of that, beating the Cardinals to earn the No. 6 seed and a third meeting with the Seahawks. Whitworth returned to the lineup, bringing a sense of security to an offense rallying around neophyte John Wolford until injury forced an ailing Jared Goff into action. Whitworth & Co. powered a 131-yard output for rookie running back Cam Akers﻿.

It was the third postseason win of Whitworth’s career, and also just the third for the Rams franchise since Whitworth broke into the league 15 years ago with the Bengals. In just four years, he’s become a proud member of the organization, his community service efforts recently earning him a third nomination for the Walter Payton Man of the Year Award.

“It’s a tremendous honor,” Whitworth said. “I don’t do well with recognition for things like that. I’m very honored and humbled by it. But I believe in my heart it’s just the right thing that I’m doing. It’s not something that I feel like I have to be commended for. …

“I think that you’ll remember a lot of that more than you think when you’re done playing, more so than just the football. Obviously to me it’s a lot more important, being here in L.A. and being a part of this community and trying to be a part of the positive part of it.”

The 6-foot-7 blindside protector has played a big part, on and off the field.

You can hear the full episode of the “Huddle & Flow” podcast hosted by Steve Wyche and Jim Trotter on Apple Podcasts*,*Spotify or your favorite podcast provider.