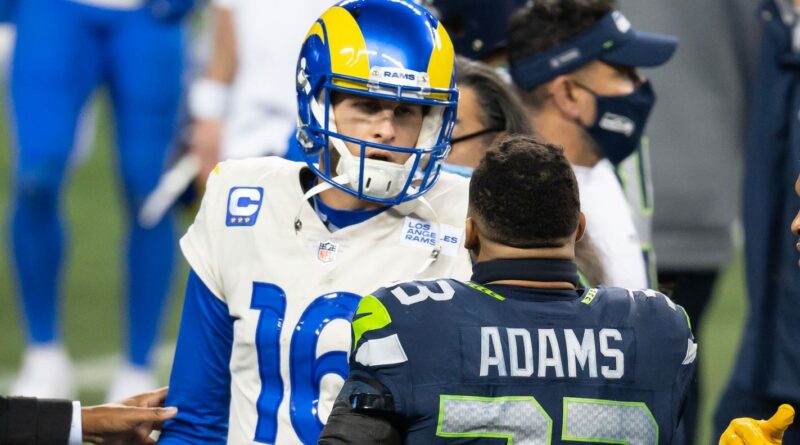 The excitement flowing through Jamal Adams after the Seattle Seahawks captured the NFC West with a Week 16 win over the Los Angeles Rams compelled him to light a cigar following his postgame news conference that day.

"I'm going to enjoy my cigar … we champions," Adams declared then.

It may have been a playful gesture from a player who essentially forced a trade from the New York Jets prior to the season for a shot at making the playoffs. But Adams' postseason debut resulted in the first playoff loss of the safety's career, as the Rams bested the Seahawks 30-20 in an NFC wild card-round upset.

Jared Goff, who entered Saturday's game as the backup but relieved banged-up starter John Wolford as he nursed his own thumb injury, hadn't forgotten Adams' cigar ploy from a few weeks ago.

And after the Rams advanced, the former No. 1 overall pick pointed out that revenge was sweet, without naming Adams.

"Two weeks ago you saw them smoking cigars and getting all excited about beating us and winning the division and we're able to come up here and beat them in their own place," Goff told reporters, per ESPN. "It feels good."

“Two weeks ago you saw them smoking cigars and getting all excited about beating us and winning the division and we’re able to come up here and beat them in their own place,” Jared Goff said. “It feels good.”

Adams' hit on Wolford in the first quarter knocked out the quarterback, forcing Goff, who underwent surgery on his throwing hand less than two weeks ago, into the game. Goff didn't have to do much, but completed 9 of 19 passes for 155 yards and one touchdown with no turnovers.

Meanwhile, Adams could be heading for the operating table next. ESPN reported Sunday that Adams played Saturday with a torn labrum in his left shoulder that will require surgery. He also plans to have surgery on the fingers of his left hand, and his right shoulder may need to be operated on.

Seahawks’ S Jamal Adams played Saturday’s game vs. the Rams with a torn labrum in his left shoulder that will require off-season surgery. But Adams has other issues. His right shoulder also might need surgery. And Adams plans to have surgery to the fingers on his left hand.

Ohio State’s Tattoo Gate, Alabama’s T-Town and other scandals that would be legal under new NIL rules

Super Bowl 2020 setup: What you need to know about Chiefs vs. 49ers matchup, latest NFL news