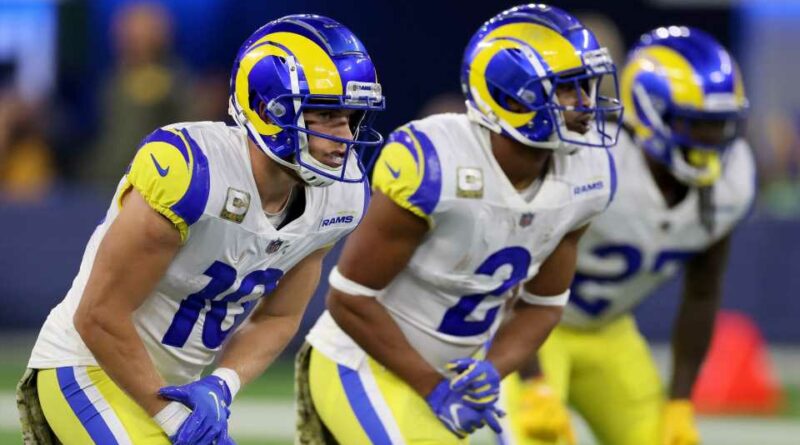 Odell Beckham Jr. has gotten his wish. He is going to play with a strong quarterback and be a part of a Super Bowl-contending team.

Beckham became the latest star to join the Rams when he signed a one-year contract with Los Angeles on Thursday. The Rams are 7-2 and in second place in the loaded NFC West, and they have what might be the best receiver room in the NFL after adding him.

There are still two major questions to be answered, however: How does Beckham fit in with the Rams? And where will he land on the depth chart?

Presumably, Beckham wouldn’t have signed with a team to be a backup, so we can assume he will be on the field more often than not. But the Rams already have Cooper Kupp, Robert Woods and Van Jefferson, so something will have to give to get Beckham snaps.

How will the Rams’ wide receiver depth chart look for the second half of the 2021 NFL season? Here’s a look at where Beckham fits within a loaded position group.

SUTELAN: Why Odell Beckham Jr. signed with the Rams

Kupp is arguably the No. 1 receiver in the NFL right now, so naturally he’ll be No. 1 on the Rams’ depth chart. Kupp has shown excellent chemistry with Matthew Stafford this season and is leading the NFL with 74 catches, 1,019 receiving yards and 10 receiving touchdowns. He has been targeted at least nine times in every game.

Kupp (6-2, 208 pounds) can work on the outside and out of the slot. He is a great route runner and has enough speed to make big plays downfield. As long as Stafford continues to trust him, Kupp will be the top threat in the Rams’ offense, especially in the red zone, where he leads the NFL with 21 targets.

Woods and Kupp have been a solid 1-2 tandem since 2019, and they were largely equal when Jared Goff was the quarterback. But Woods has been a clear-cut No. 2 receiver this year as he has seen 69 targets from Stafford compared to Kupp’s 103.

Still, Woods has been productive. He has 45 catches for 556 yards and four touchdowns on the year. He’s on pace for his third 1,000-yard receiving season in the last four years and has averaged 8.8 targets per game since Week 5.

Woods will likely cede some targets to Beckham, but not an abundance of them. It’s more likely that Beckham will take a significant portion of his targets from Jefferson while Woods and Kupp will make only minor concessions.

The Rams are an interesting landing spot for Beckham because he will likely serve as their No. 3 receiver. He has as much talent as Woods and Kupp, but he hasn’t shown it as much over the past two seasons.

Beckham has averaged just 2.8 catches per game on 5.5 targets this season. His numbers should improve in the Rams’ offense as teams will pay less attention to him thanks to the presence of Woods and Kupp. At the same time, his targets aren’t likely to increase significantly, so his production will be based more on how quickly he can develop chemistry with Stafford.

Beckham may not be a true No. 3 receiver while he gets acclimated in Los Angeles, but by season’s end, look for him to be established in the role. He didn’t sign with the Rams to be a fourth receiver and backup, so expect them to use him a lot in three-wide sets.

Jefferson, a second-round pick of the Rams in the 2020 NFL Draft, has been targeted 46 times this year and posted 27 catches for 433 yards and three touchdowns. His numbers seem likely to decline after the addition of Beckham.

Jefferson has played 78.2 percent of the Rams’ offensive snaps this season. If Beckham earns the No. 3 job, that percentage will decline significantly and could perhaps fall closer to the 22.9 percent of snaps Jefferson played as a rookie, when he posted 19 catches for 220 yards and a touchdown last season.

Skowronek has played sparingly on offense for the Rams as a rookie with just 37 snaps. The Notre Dame product has logged 111 snaps on special teams, good for seventh-most on the team and second-most among skill position players; only tight end Jacob Harris (137) has more.

Skowronek would have had a path to more playing time had the Rams not added a veteran like Beckham, but for now, he will continue to play primarily on special teams.

Koski has played just 11 snaps this season, all on special teams and all in Week 9 against the Titans. Those snaps came in the wake of the Rams releasing DeSean Jackson and Tutu Atwell undergoing season-ending shoulder surgery.

Koski will likely be kept inactive with Beckham joining the team, so he won’t have a role unless the Rams experience injuries or illnesses at receiver.

Joe Burrow, Tua Tagovailoa or Justin Herbert: Which rookie QB's in the best position to succeed?