Ravens first-round receiver Marquise Brown was cleared for individual drills this week in minicamp. Baltimore hopes he’ll be able to do more when the team reconvenes in late July.

John Harbaugh said Thursday he is hopeful the rookie wideout will be ready for training camp, per NFL Network’s Mike Garafolo. Harbaugh added he doesn’t know for certain, but there have been no setbacks and the team is optimistic.

Brown underwent Lisfranc surgery in January after suffering a foot injury he tried to play through in his final season at Oklahoma. The injury did not stop the Ravens from taking the shifty, speedy wideout No. 25 overall.

Brown has yet to begin running at full speed, but the hope is that he’ll be closer to full health at training camp. If he’s healthy to open the season, Brown projects as a Ravens starter from the get-go.

Other injuries we are monitoring Thursday as teams wrap up minicamps:

1. Washington Redskins offensive tackle Trent Williams, who has skipped offseason workouts, posted an Instagram story getting ready for an operation. NFL Network Insider Ian Rapoport reported that the latest surgery was to clean up the scar left by surgery on a growth on his scalp earlier this offseason. It’s not considered major surgery and not related to a setback.

2. Jacksonville Jaguars coach Doug Marrone said he does not expect receiver Marqise Lee (knee) or left tackle Cam Robinson (knee) ready for training camp in July. Marrone hopes both starters will be ready at some point during camp.

3. Cowboys receiver Noah Brown underwent a knee scope last week, keeping him out of minicamp. He is expected to be ready for training camp.

4. Colts tight end Jack Doyle was able to run routes at full speed after Thursday’s practice, per Zak Keefer of the Indy Star. Doyle didn’t participate in practices this offseason but could be on track for training camp. Doyle is coming off hip surgery and a kidney injury. 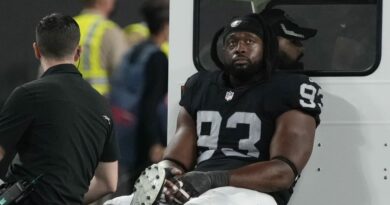