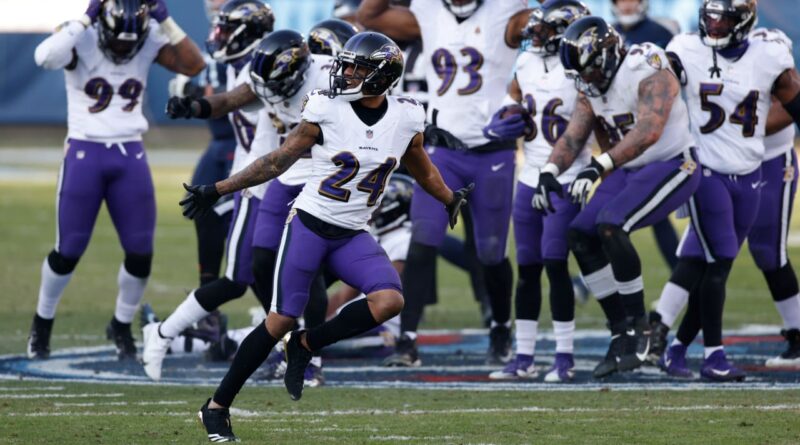 In the regular-season matchup between Baltimore and Tennessee in November, a pregame dustup occurred when Titans players gathered on the Ravens’ midfield logo. The event included a heated exchange between coaches John Harbaugh and Mike Vrabel.

Following a late fourth-quarter interception by cornerback Marcus Peters﻿, a flock of Ravens defenders danced on the Titans’ logo, celebrating a game-icing turnover.

The Ravens were penalized 15 yards for taunting.

It mattered not as Lamar Jackson and the offense earned two first downs to officially put the game to bed for a 20-13 Baltimore victory.

Titans coach Mike Vrabel told reporters after the game he didn’t have any extended thoughts on the Ravens’ celebration.

“Nope. I coach the Titans, not the Ravens,” Vrabel said.

Jackson, who led his team off the field before the clock expired, was not shy about making it known there’s no love lost after November’s antics.

“We didn’t see what went on before the game the last time. [Later we saw] they were standing on our logo and getting into it with our coach. That was disrespectful because we treat all our opponents with respect. … There wasn’t any reason for us to shake hands.” he said, per Sarah Ellison.

After back-to-back losses to Tennessee, including last year’s playoff failure, Ravens players were clearly frustrated. The mid-field dance celebrated not only thwarting a now heated opponent but marked the club’s first postseason victory with Jackson under center.

Chelsea warned about Thomas Tuchel problem involving Kylian Mbappe and Neymar
We and our partners use cookies on this site to improve our service, perform analytics, personalize advertising, measure advertising performance, and remember website preferences.Ok