Home » NFL » RB Index: Five running backs I trust most in the Divisional Round 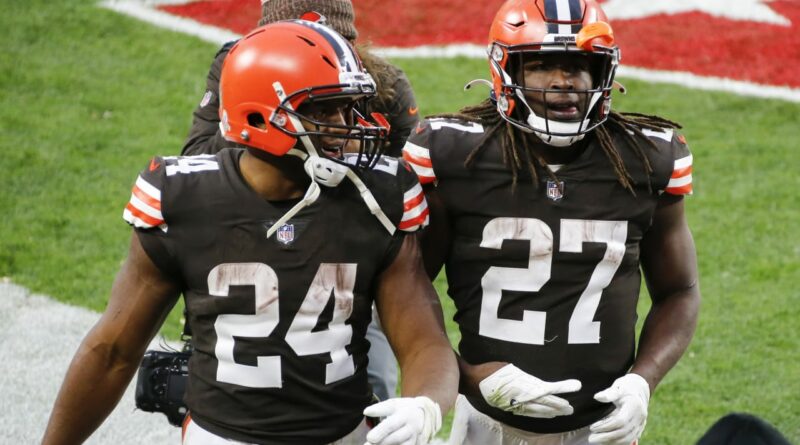 Earlier this week, my editor asked which rusher I trust the most in the Division Round. My initial thought: Lamar Jackson﻿. I know, he’s not a running back, but allow me to explain …

The 2019 league MVP has the sixth-highest career figure in rushing yards per game (111.0) in postseason history of all players (not just quarterbacks) with a minimum of three playoff games. His ability to escape pressure in the pocket then immediately turn up field and juke even the league’s best defenders is unbelievable. Jackson’s highlight-reel runs — including his 48-yard lightning strike in last week’s wild-card victory over Tennessee — shouldn’t surprise us anymore, but that doesn’t make them any less remarkable.

Ravens offensive coordinator Greg Roman gives Lamar free rein to run wild because of his trust in Jackson’s unique ability. When I look at the running backs playing in the Divisional Round, there are several guys who have earned that same level of trust within their respective offenses. Trust goes a long way, especially at this point in the season, when the Lombardi Trophy feels thisclose.

So today, I’m ranking the top five running backs I trust most heading into this weekend’s slate.

Listen, Kamara is what makes this Saints offense go, the one who keeps defensive coordinators up at night. When he’s hot, the Saints are unstoppable. Just look at what he did on Christmas Day. What makes Kamara the most trustworthy running back remaining in the playoff field is the fact that he’s coming off his best campaign after having three very impressive seasons to start his career. Perhaps it was getting the well-deserved contract extension or being The Guy after injuries sidelined other offensive weapons, but it makes no difference. A potent all-around weapon from the insanely deep 2018 RB draft class, Kamara amassed 932 rush yards (at a healthy 5.0 yards per carry), 1,688 scrimmage yards and 21 total TDs to help the Saints get another shot at a Lombardi Trophy.

It’s also worth mentioning that he’s played in six playoff games over his four years in the league. He knows of the magnitude of Sunday’s contest against Tampa Bay — especially IF this is Drew Brees﻿’ swan song — and knows the sting of losing so close to the Super Bowl.

Chubb is the heartbeat of Kevin Stefanski’s offense — everyone around the running back is better because of his domination with the ball in his hands. Combining his physical style (as well as Kareem Hunt﻿’s versatility) with Cleveland’s impressive offensive line gave the Browns the third-best rushing offense in the league. Chubb may not be the home-run hitter others in this list are, but his 5.6 yards-per-carry average bodes extremely well this weekend against a Chiefs defense that ranks in the bottom half of the league in every rushing category. He’s a competitor and has been an instrumental part of Cleveland’s rise to relevance since being drafted in 2018. The biggest game in recent Browns history is here, and I can’t imagine Stefanski won’t lean on the player who (if we’re really being honest) got them in this position.

Akers has taken ownership of the Rams backfield since Week 12, averaging 22.2 touches, 92.5 rush yards and 4.5 yards per carry in that span. After averaging just 6.6 touches per game through the first 11 weeks of the season, Akers is fresh. This was apparent in last week’s wild-card win over Seattle. If the Rams were going to have success against the Seahawks, everyone knew Akers had to have a big game, with John Wolford making his first career start and Jared Goff still recovering from thumb surgery. And the rookie delivered in a major way, with 131 yards rushing and 45 receiving. This effort should instill plenty of confidence heading into this weekend’s meeting with Green Bay. Akers has made the Rams’ offense much more physical. Seeing how he’s stepped up as a rookie — at this stage in the season — makes me trust him.

If Jones has proven anything over the last two years, it’s that he’s a reliable bell cow who is capable of carrying an offense. His usage dipped a bit in this past regular season with Aaron Rodgers playing at an MVP level, but he was still highly effective, averaging nearly a full yard more per carry in 2020 (5.5) than in 2019 (4.6). This effectiveness will be a key factor against the Rams’ top-three run defense.

We can’t talk about Aaron Jones without mentioning his knack for finding the end zone. Jones has hit paydirt 30 times (25 rushing TDs) over the last two seasons, and he didn’t shy away from continuing to score under the spotlight of last year’s postseason. Seeing how Jones has logged a pair of TDs in each of his career playoff games (both last season), I’d expect the Pack back to show up in a big way when the top-seeded Green Bay Packers take the gridiron on Saturday.

Hunt and his teammates have been vocal about the RB’s desire to help the Browns go deep in the playoffs and face his former team, the Kansas City Chiefs. Remember, Hunt was released by the Chiefs in November of 2018 after a video surfaced of him shoving and kicking a woman the previous February. Hunt was given another chance to play in the NFL when then-Browns general manager John Dorsey signed him in the ensuing offseason. Hunt has taken advantage of his second act and displayed a dedication to his career both on and off the field.

Now that you’re up to speed, we can discuss the comments made this week. After Cleveland’s upset win over Pittsburgh, Baker Mayfield said, “Kareem ran pissed off. He ran like he wanted to get to Kansas City.” Then, Hunt told reporters Thursday that he had the feeling and “believed” all season that he’d meet the Chiefs in the playoffs. Any player who has this type of extra motivation is someone I’m not betting against. Not to mention, he’s gotten better and better each time he takes the field this season. I mean, his 11-yard touchdown run in last week’s wild-card win where he dragged the entire Pittsburgh defense into the end zone was absolutely bananas. Hunt has set the tone for this Browns team coming into this matchup with the defending Super Bowl champions, and I can’t wait to see how things play out on Sunday.