As if the mood at Redskins Park couldn’t get more dreary following their blowout loss to the Atlanta Falcons, Jay Gruden and his team received grave news on Monday when they learned starting guards Brandon Scherff and Shawn Lauvao and starting wide receiver Paul Richardson will miss the remainder of the season with injuries that will require surgery to repair.

Scherff, a two-time Pro Bowl selection, tore a pectoral muscle in Sunday’s loss. Lauvao tore an ACL and Richardson needs surgery to repair an AC joint in his shoulder.

The injuries – particularly those to Scherff and Lauvao – seriously impact Washington’s chances of maintaining its lead in the NFC East. Washington’s 25th-ranked offense has struggled with consistency this season, but the rushing attack represented a bright spot. Adrian Peterson ranks eighth in the NFL, averaging 75 yards per game, and as a team, Washington ranks 10th, with 121.9 yards per contest.

The production in the run game and a strong defense has served as the recipe for success in Washington’s five victories.

The last two days have represented quite the swing in momentum for the Redskins, who had won three straight and held a two-game lead in their division. But things have turned sour following Sunday’s 38-14 loss to Atlanta. The news, confirmed by Gruden, brought a familiar sinking feeling for the Redskins and their fans. Last season they opened the season with a 3-2 record and appeared to be gaining momentum just before the injury bug hit hard, robbing the team of key starters. The Redskins managed only four wins the remainder of the season while juggling multiple starting offensive line combinations because of injuries.

Until Monday, Washington had become a surprise front-runner in the NFC East, but the Redskins' tragedy could open the door for their rivals. Philadelphia now trails by just one game at 4-4. Dallas entered Monday night's home game against the Titans at 3-4. 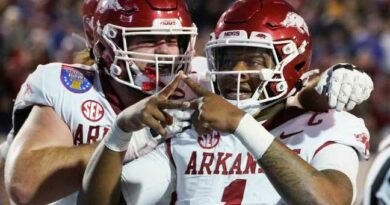 Razorbacks ‘got lucky’ in 3OT win over Jayhawks 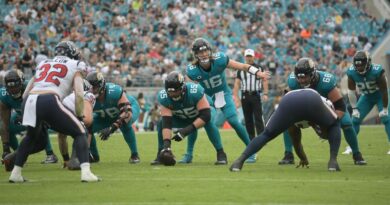