The cheeky ease with which the Baltimore Ravens fool around with a football is nearly equal to their fooling around in the locker room – even in the middle of play-off week – where a Christmas tree still stood in the corner, wearing a top hat.

Outside, a lady bore a cake with phosphorescent icing meant for Lamar Jackson, their star quarterback, who is favourite to be named the NFL's MVP in a few weeks' time and who has just turned 23, an event they celebrated by giving him a "slap on the back of the head a couple of times". 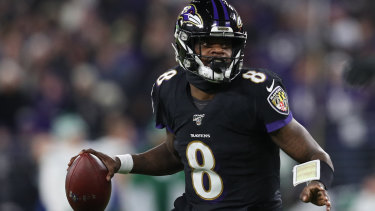 All eyes will be on Baltimore Ravens star Lamar Jackson in Sunday’s NFL play-offs.Credit:Getty

A toe-tapping bassline thrummed from the speakers, the rhythm of which was periodically interrupted by laughter coming from Jackson's locker, which like all the others in the room was ringed by strings of holiday-coloured lights. Which begged the question: Who is having more fun in life at the moment, the young quarterback of the Ravens or a waterslide tester?

"Just gonna play ball," he says. "Not gonna overthink it."

The Baltimore Ravens may or may not win a Super Bowl, but they already have established this much: An NFL team can be great without being grim. They have utterly broken all the old patterns and casts with their history-making offence, the first to average more than 200 yards passing and 200 yards running a game. "Street ball," Jackson calls it. Like their quarterback, they're at once an embodiment of power and yet feathers on a breeze.

It's not just Jackson's combination of twirling elastic-armed passes, jolting speed and evasiveness that puts defenders and audiences alike in a trance. There is a boy's joy in the way he plays, a freedom that has won him the admiration of Drake and actor Al Pacino. In an oral history of Any Given Sunday for The Ringer, Pacino said: "There are occasionally these players that are inspiring because you can see the game that they play is a game."

All of which Jackson absorbs with the innocent, deep modesty of a kid who just wants to go back outside. This is not someone whose head is easily turned. He has yet to even unpack the Heisman Trophy he won at Louisville as the best player in US college football – "The Heisman's still in a box," he says – and shrugged off a team MVP award he won this week.

A taste of the athleticism that has the NFL talking about Lamar Jackson.Credit:AP

"I'm just trying to work," Jackson says. "I want a Super Bowl. All the accolades, I'll cherish that another time. I'm chasing something else right now."

He is the grief and shame of the old-schoolers who passed him over, the 32nd player and fifth quarterback chosen in his NFL draft class, and those who whiffed on him must be pounding their foreheads in self-recrimination. He has led the Ravens to more than 30 points on 10 different occasions this season and when Tennessee Titans coach Mike Vrabel was asked how he will try to slow him down in the play-offs on Sunday (AEDT), there was a helpless pause before he replied, "Other than try to tie his shoelaces together?"

Of course, none of it is as easy as the Ravens make it look. Underneath the ease and street ball is incredible discipline, an underrated quality of which coach John Harbaugh said: "If it was easy, everyone would have it."

'The only thing that surprises me with Lamar is almost every day, every game, he drops my jaw.'

It was not quicksilver speed but rather discipline that has allowed Jackson to grow from an inconsistent flash of a rookie who committed four turnovers in the play-offs last year against the Los Angeles Chargers. "He's made that jump and mostly because he works hard at it," quarterbacks coach James Urban says.

He's now a much sounder decision-maker who knows "when to give and when to pull it, when to go over the top and when to dump it down" receiver Willie Snead says.

Jackson's work ethic is no shock to those on the Ravens staff who were smart enough to look beyond old stereotypes and see him for what he is: not just a physical genius but a mental giant.

"The only thing that surprises me with Lamar is almost every day, every game, he drops my jaw," Urban says.

It's only just now becoming apparent to the rest of us that Jackson's primary weapons are not his arm and legs, but his head and his heart. The Ravens saw it from the beginning, starting with retired former general manager Ozzie Newsome and his successor, Eric DeCosta, whose high appraisal of him "trickled down" to Harbaugh, according to Snead.

"Harb just bought in, and said, 'This kid is amazing; this kid can grow. He's a competitor and he can lead this locker room,'" Snead says.

One of the things they saw was the stubborn self-belief it took for Jackson to fend off the conventional thinkers who wanted him to change positions at every step of his career. They saw only his legs and speed, not his arm or his mind.

"If that's your dream, chase it," Jackson says. "Don't let nobody tell you different, 'ause I ain't let 'em tell me different."

That independent will was instilled by his mother, Felicia Jones, who practises the same herself. During the draft process she smartly rejected the overtures of agents, because she understood the NFL rookie pay scale made his contract essentially preset. "Be the head and not the tail," she has told him since he was a boy. "Don't be a follower, be a leader."

It's impossible to overstate just how much that strong-mindedness has imbued the Ravens. Many of them are as young as he is – 22 players are either rookies or in the second season – and his attitudes and habits have become theirs.

"I'm not the greatest; I'm not the best, I just want to win," Jackson says.

49ers v Vikings, Sunday, 8.30am: The 49ers are the top seed in the NFC, which tells you how good their regular season was. But the play-offs are a different story. Noone gave the Vikings a chance against the Saints last weekend. But they won.

Ravens v Titans, Sunday, 12.15pm: The Ravens are the favourites to win the Super Bowl and have broken a host of records this season. The Titans have Derrick Henry, who was the NFL’s leading rusher, and hope.

Chiefs v Texans, Monday, 7am: The Chiefs haven’t lost since the start of November, a run that corresponds with the return from injury of star quarterback Patrick Mahomes. The Texans came from 13-0 down last week to beat the Bills.

Packers v Seahawks, Monday, 10.40am: The Packers have got Aaron Rogers, a good defence and not much else, while the Seahawks have dragged former star running back Marshawn Lynch out of ‘‘semi’’ retirement to fill a huge injury-inspired void for them.

How two was better than one all night for Alabama vs. Oklahoma in the 2018 Orange Bowl 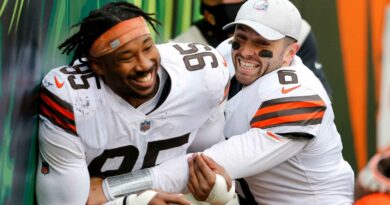