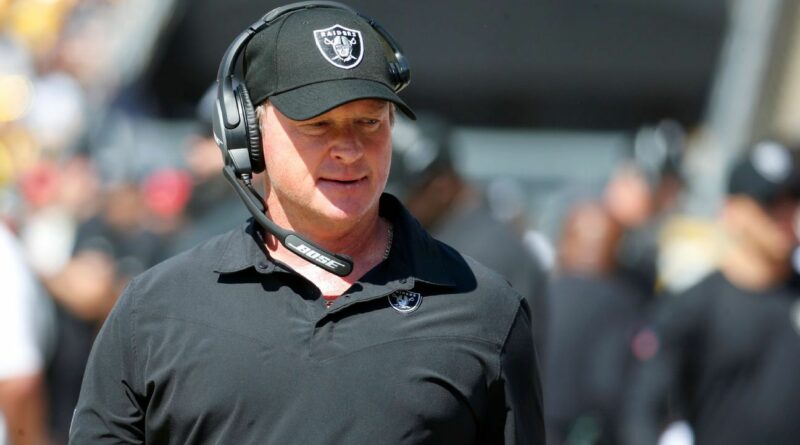 The email, sent to the president of the Washington Football Team in July 2011 as the NFL and its players were in the midst of trying to resolve a lockout, said Smith had “lips the size of michellin tires,” the Journal reported, saying it has reviewed the email.

Gruden, who was employed at the time as the lead analyst for “Monday Night Football,” told ESPN he did not recall writing the email but apologized for the fallout.

He said he has routinely used the term “rubber lips” to “refer to a guy I catch as lying … he can’t spit it out.”

“I’m ashamed I insulted De Smith,” Gruden told ESPN, adding, “I never had a racial thought when I used it. … I’m embarrassed by what’s out there. I certainly never meant for it to sound that bad.”

Gruden said he has spoken with Raiders owner Mark Davis and expects to speak with him again. He was not sure whether he would face any discipline from Davis or the NFL, which condemned Gruden’s comment in a statement Friday afternoon.

“The email from Jon Gruden denigrating DeMaurice Smith is appalling, abhorrent and wholly contrary to the NFL’s values,” NFL spokesman Brian McCarthy said. “We condemn the statement and regret any harm that its publication may inflict on Mr. Smith or anyone else.”

The league is looking into the matter, with disciplinary action possible for Gruden, according to multiple reports.

In a statement Friday afternoon, Davis called the content of the email “disturbing” and “not what the Raiders stand for.”

“We were first made aware of the email late yesterday by a reporter and are reviewing it along with other materials provided to us today by the NFL,” Davis said. “We are addressing the matter with Coach Gruden and will have no further comment at this time.”

Gruden said he spoke with the Raiders’ players Friday morning to give them a heads-up that the Journal’s report would be coming out.

He also said, “That might not have been the best time of my life,” referring to when the email was sent during the 2011 lockout. “I vented a lot. … I never felt we were getting the truth and honesty [in negotiations]. I just felt that [former NFLPA executive director] Gene Upshaw never would have let it get that far.”

The email came to light during the NFL’s investigation of workplace misconduct with the Washington Football Team, as “the league was informed of the existence of emails that raised issues beyond the scope of that investigation,” according to McCarthy. Senior league executives reviewed the content of more than 650,000 emails, including the one the Journal reported was written by Gruden to Bruce Allen, then the president of the Washington Football Team. The NFL then sent pertinent emails to the Raiders for review.

“This is not the first racist comment that I’ve heard and it probably will not be the last,” Smith told the Journal. “This is a thick-skin job for someone with dark skin, just like it always has been for many people who look like me and work in corporate America. You know people are sometimes saying things behind your back that are racist just like you see people talk and write about you using thinly coded and racist language.

“Racism like this comes from the fact that I’m at the same table as they are and they don’t think someone who looks like me belongs,” Smith said. “I’m sorry my family has to see something like this but I would rather they know. I will not let it define me.”

Gruden led the Raiders from 1998 until he was traded to Tampa Bay after the 2001 season. He immediately led the Buccaneers to a Super Bowl title — against the Raiders.

He lasted through the 2008 season in Tampa before being fired, then headed to the “Monday Night Football” booth.

The Raiders, then in Oakland, rehired Gruden in 2018 with a 10-year, $100 million contract. The team moved to Las Vegas last year and has not made the playoffs since his return. But the Raiders are 3-1 in 2021.