Taken with the second selection of the 2020 NFL Draft, Chase Young immediately paid dividends for Washington, as evidenced by him being awarded AP NFL Defensive Rookie of the Year.

Young’s second season in the NFL didn’t go nearly as well, though, as it was cut to nine games due to a torn ACL.

Young’s status for his third season is looking good so far, according to Commanders head coach Ron Rivera, who said the defensive end is doing well in his recovery, but offered no timetable.

“He has been doing real well,” Rivera said Monday, via team transcript, at Washington’s pre-draft news conference. “He is here today again and it’s a great sight to see. Got an opportunity to spend a little time with him and he’s fired up. He’s really focused in, and he’s attacking his rehab.”

Young, who had 7.5 sacks as a rookie and saw his production slowed a bit prior to last season’s injury, tore his ACL in a Week 9 game versus the Tampa Bay Buccaneers.

While Rivera is pleased with what he’s seen from Young so far this offseason, he offered no details or goals for when Young will be back on the field.

“No, we’re not going to put a time limit on anybody’s injuries,” Rivera said. “All we can tell you is that he’s doing exactly what he needs to do.”

There are needs aplenty for the Commanders – particularly wide receiver and defensive back – as they approach the 2022 NFL Draft, but one paramount necessity is getting their 2020 first-round pick back healthy for 2022. 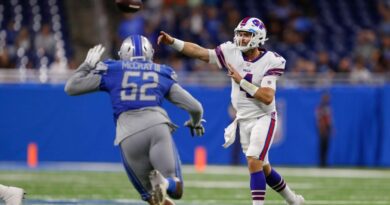