The New England Patriots tight end is expected to play in tonight’s tussle with the Buffalo Bills, NFL Network Insider Ian Rapoport reported, per a source informed of the decision.

It’s the news we’ve been expecting after Gronk got in limited practices this past week. He missed last game due to back and ankle injuries.

Gronkowski was officially listed as questionable.

Tom Brady’s top target will face his hometown Buffalo team, a franchise which he’s dominated over the years. The Bills are the only team Gronk has 1,000-plus receiving yards against in his career. In nine seasons, the tight end has amassed 66 receptions on 100 targets for 1,027 yards and 12 receiving touchdowns versus Buffalo, all tops for his career versus any opponent. 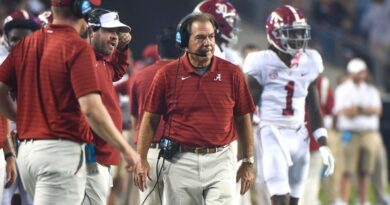 Bamas done? A RB for Heisman? Breaking down Week 6 overreactions