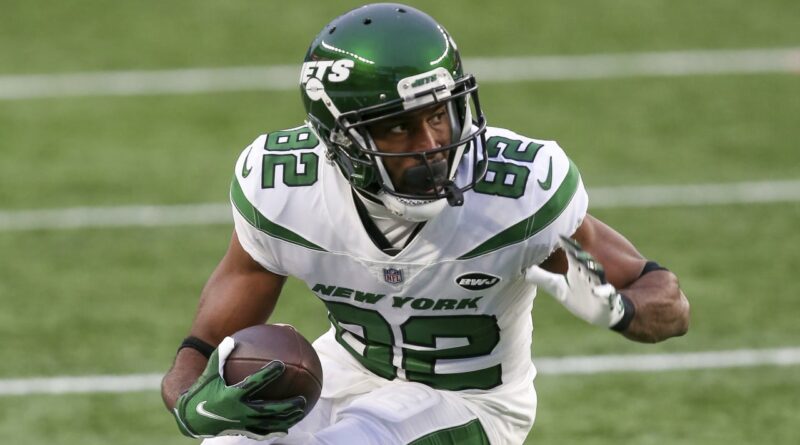 The Jets’ busy offseason has put the status of one of their more reliable pass-catchers in recent years in an interesting position.

New York added ﻿Corey Davis﻿ and ﻿Keelan Cole﻿ via free agency, then drafted Mississippi speedster Elijah Moore in April, meaning there might not be room for ﻿Jamison Crowder﻿ to fill a significant role in 2021. Crowder’s absence during OTAs, then, wasn’t a huge surprise, but what was refreshing was new coach Robert Saleh’s method of addressing the matter.

“So Jamison, obviously, he’s working through some stuff with (his) contract with (general manager) Joe (Douglas) and his staff and (his) agent and all that stuff,” Saleh said Friday. “So really confident to get Jamison here quickly, and when we do, he definitely has a role for this team.”

A role can be defined by one of 53, with various sizes, and in June it is one of 90. The sticking point, though, is how Crowder should be compensated for said role.

Crowder carries a cap number of $11.375 million into 2021, just a little over a million less than Davis. They’re both in the top three in terms of cap number on the Jets’ entire roster.

The Jets aren’t hurting for cap, but economically, that’s too much money to devote to two receivers when New York also has eyes on increasing ﻿Denzel Mims﻿’ role and working Moore into the offense as a legitimate contributor.

When Saleh is asked, then, if Crowder has a role, of course he does in the minds of the coaching staff. You can never have too much receiving talent.

“Absolutely,” Saleh said. “Jamison’s definitely got a role here, and we’re excited to have him.”

Saleh isn’t in charge of the team’s finances, though. What’s likely to come of this is one of two (or three) resolutions: Crowder either takes a pay cut or creatively restructures his deal, or he’ll end up being released.

It’s a simple matter of economics. For now, he’s spending the voluntary portion of June handling the business side. We’ll see if the football side of things still includes him in a Jets uniform.