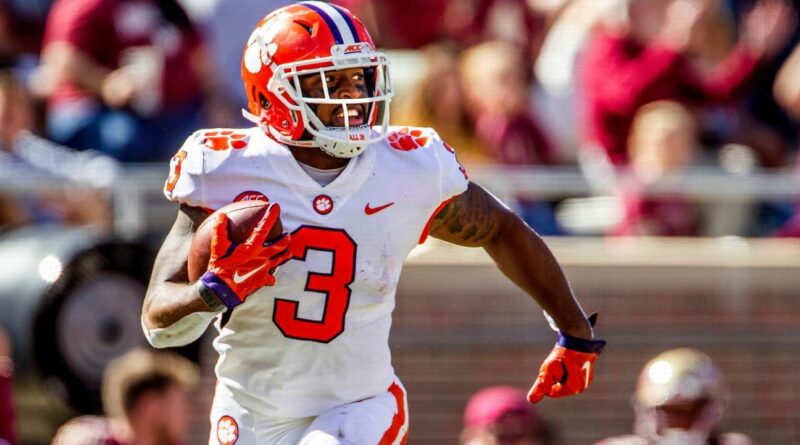 GREEN BAY, Wis. — Before this year’s NFL draft, Amari Rodgers called the Green Bay Packers his “dream scenario,” in part because of the opportunity to catch passes from reigning NFL MVP Aaron Rodgers.

The former Clemson star still hopes that’s the case even though things have deteriorated between the quarterback and the organization.

But it doesn’t sound as if Packers general manager Brian Gutekunst picked Amari Rodgers as a peace offering to his franchise quarterback.

“I hope everybody on our team and within our building is excited about adding Amari,” Gutekunst said Friday. “I think it was something we wanted to add — we’ve wanted to add for a few years — that guy that can play inside and do some returning. So yeah, I hope everybody’s pleased with it.”

It was the first time since his inaugural draft in 2018 that Gutekunst picked a receiver, and by trading up to take the 5-foot-9, do-it-all slot receiver in the third round (No. 85 overall), it became the highest spot the Packers have drafted a receiver since Davante Adams in the second round (53rd overall) in 2014.

Adams set the franchise record with 115 catches last season — 82 more than any other Packers receiver to account for the largest gap between team No. 1s and 2s in the league, according to ESPN Stats & Information research.

For his part, Amari Rodgers said he was aware of the news that broke Thursday, when ESPN detailed Aaron Rodgers’ desire to move on and not play for the Packers again.

“Of course I want to catch passes from the reigning MVP, future Hall of Famer,” Amari Rodgers said. “So I know for sure I would love to have the opportunity to play for somebody like him on the field and also Davante, too, so I’m looking forward to that.

Amari Rodgers’ father, Tee Martin, played quarterback in the NFL and is the Baltimore Ravens’ receivers coach. But Martin also coached former Packers receiver Randall Cobb in college at Kentucky, and the Packers might be looking to use Amari Rodgers in a similar role to what Cobb played in Green Bay.

“Since Randall Cobb left, everybody in my family felt like they haven’t had a slot player like him,” Amari Rodgers said. “They just felt like it was a good fit for me to go there with Aaron Rodgers, him being the prolific quarterback that he is, and with Davante, being that he is a prolific receiver that he is, to bring me in to take a little attention off of him.

“I feel like that’ll be perfect. My skill set and what I’m able to do in the offense, I feel like it’s something that will be able to help the offense for sure.”

In his last season at Clemson, 86% of Amari Rodgers’ targets came in the slot, while just 31% of Aaron Rodgers’ attempts in 2020 were targeting the slot, according to ESPN Stats & Information research.

“He fills so many holes for us,” Gutekunst said. “That’s one of the reasons why we traded up for him was because not only as a punt returner and a slot receiver, but as you guys have seen over the past couple years the creativity that [coach] Matt [LaFleur] has within his offense, some of the jet sweeps and screens.”

The trade for the receiver, however, became an early priority. Gutekunst said he considered taking Amari Rodgers in the second round but instead took Ohio State center Josh Myers at No. 62.

“After I got off the phone [with Myers], I turned around to see if we could get back up to get Amari,” he said. “A couple of my guys had gone down to get something to eat, so we had to get everybody back on the phones fast. But we were trying pretty significantly to get up to go get Amari. It took us a little while longer than we wanted to. We paid a little bit of a price, but I thought it was important because of the value of the player I wanted.”

Gutekunst gave up the first of the Packers’ two fourth-round picks (No. 135 overall) to the Tennessee Titans to move up from 92 to 85.

Saints wrap up division; have eyes on bigger prize