The topics come up seemingly every time the NFL plays a game in London: Will the city get an NFL franchise? And could the city ever host the sport’s biggest event, the Super Bowl?

Goodell praised the way local fans have embraced the sport, but said it would be difficult for London to land a Super Bowl without a franchise.

“That’s been talked about a lot,” Goodell said, regarding a London Super Bowl. “But the ownership really feels strongly that that’s a reward for our fans. I think if you had a franchise here, I think it would come into play. I think without a franchise it’s probably difficult.”

And despite the support for American football in London, Goodell conceded that locating a franchise there poses major challenges, especially from a competitive standpoint.

“I’ve always said this in the last few years: I believe that the fan base is here for a team,” Goodell said. “Just in numbers and passion, I think the business community/commercial community is strong enough. The political support we have for this is extraordinary. I think all of those elements are here. The one I’m still not comfortable (with) yet is the competitive side. How do we do this to not only be fair to the team that’s playing here, but the teams that have to come over to play?”

Scheduling and travel is not so much an issue during the regular season, when the NFL can give teams playing in London a bye week after the game. But that’s not possible during the postseason.

“Where it’s most challenging in my view is in the playoffs, because you can’t really plan for that,” Goodell said. “So we could probably work the schedule in a fair way during the season, but when you get to the postseason it could be unfair to a team — if Seattle had to come over here for a playoff game — that’s a tough one. So we’ve got to find an answer to that. But other than that, I’m perfectly comfortable with this market and the size and passion for football. We wouldn’t have a problem.”

Seven times Peyton Manning has made us chortle, laugh and guffaw 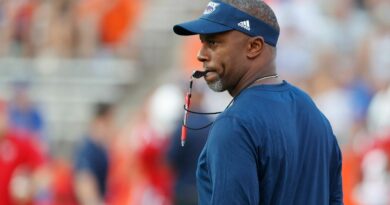 All players, coaches pass COVID-19 tests ahead of Week 1