Home » NFL » Roger Goodell on NFL in London: ‘There’s no question a team could be successful here’

Anyone who’s paid attention to the NFL over the last decade should know the league is increasingly interested in bringing its product to London.

NFL teams first appeared in the United Kingdom in 2007. Five years later, Wembley Stadium started hosting multiple NFL games. Now, the Jacksonville Jaguars are about as linked to South Florida as they are to Britain, and the demand for London Games tickets is through the roof.

And if there were any doubt about the NFL pursuing an actual franchise overseas, commissioner Roger Goodell all but put it to rest on Saturday, a day before 2018’s final London showcase between the Jaguars and Philadelphia Eagles.

Appearing on NFL Network’s “Good Morning Football,” Goodell said “this market, without question, could have an NFL team.”

“There’s no question a team could be successful here,” he added.

The MMQB’s Albert Breer elaborated on Goodell’s remarks on Twitter, noting that “for a small (and powerful) group of owners, the idea of putting a franchise in London, and beating other U.S. leagues to it, has long been a legacy plan.” He said those owners, with presumptive support from Goodell, have “put a ton of effort into it” and predicts “every effort will be made to do it.”

Putting a team in London, which was recently speculated as a mission of Jags owner Shad Khan, would not be without its challenges, of course. NFL Network’s Mike Garafalo said on “Good Morning Football” that Goodell seems to think a Super Bowl won’t land in London until a team is situated there, and Breer alluded to Goodell’s concerns over potential postseason travel for existing NFL teams in the United States.

“It’s a significant problem, without question,” Breer tweeted. “Having a Seattle or a San Francisco going there in the wild card round? And then come back and play in, say, New York in the divisional round?”

If Goodell’s comments are any indication, though, the NFL’s interest in London remains strong. And it probably isn’t going to fade anytime soon.

Barkley to use Barber’s criticism as ‘challenge’ 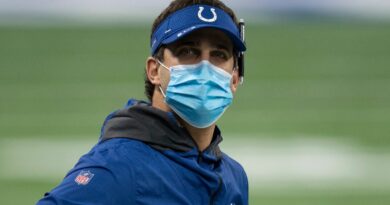