NEW ORLEANS — Alvin Kamara went dashing through the Minnesota Vikings’ defense on Friday with a Christmas Day performance for the ages.

Kamara ran for six touchdowns — tied for the most in NFL history with Ernie Nevers of the Chicago Cardinals in 1929 — as the New Orleans Saints clinched their fourth straight NFC South title with a 52-33 victory in the Mercedes-Benz Superdome.

According to the NFL Record and Fact Book, Nevers’ record was tied for the league’s longest-standing record.

Kamara is only the fourth player to score six TDs of any kind a game, joining Nevers, Gale Sayers (1965) and Dub Jones (1951), according to research by ESPN Stats & Information.

In the process, Kamara also set a franchise record with 21 touchdowns on the season. He established a personal best with 155 rushing yards in a game, and he now has a career-high 932 rushing yards and 1,688 yards from scrimmage this season.

He also set a career high with 83 catches for the season — ending his unusual streak of exactly 81 catches in each of his first three seasons. Kamara was named to his fourth Pro Bowl in four seasons earlier this week.

The Saints (11-4) still have an outside chance at the NFC’s No. 1 seed but would need some help. They finish their season at the Carolina Panthers next week.

New Orleans took advantage of Minnesota’s injury-depleted defense by running for 264 yards — the Saints’ second-highest total since 1986. The Saints had a total of seven rushing TDs, including a 1-yarder by Taysom Hill in the fourth quarter.

The Saints leaned heavily on Kamara and the run game while quarterback Drew Brees was still shaking off some rust from the broken ribs and punctured lung that sidelined him from Weeks 11 to 14. Brees threw two interceptions on Friday for the first time since the 2017 season and had two other tipped passes that were in jeopardy of being picked off.

Brees did finish with 311 passing yards, however, completing 19 of 26 passes.

The Saints’ defense also was a little beaten up on a short week. It tied a franchise record with 92 snaps played in Sunday’s 32-29 home loss to the Kansas City Chiefs, during which two key starters suffered injuries — safety Marcus Williams (ankle) and defensive end Trey Hendrickson (neck). Then the Saints lost another starter when linebacker Kwon Alexander was carted to the locker room on Friday because of an ankle injury. 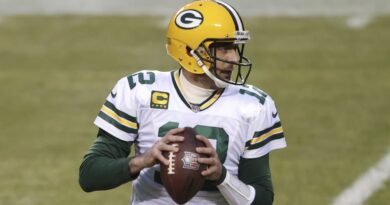