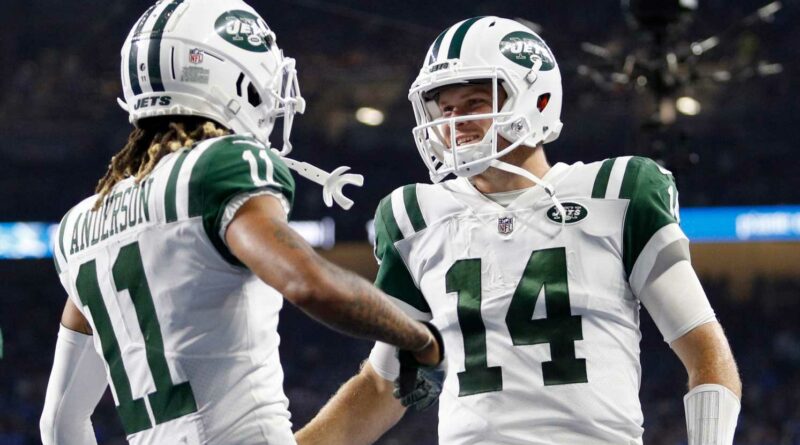 As quarterback turnover defines yet another NFL offseason, the league's version of QB musical chairs went through yet another iteration Monday afternoon.

The New York Jets pulled the plug on Sam Darnold after three seasons, trading the No. 3 pick of the 2018 draft to the Carolina Panthers for three draft choices – two of them Day 3 selections, the other a second-rounder in 2022.

Though Darnold's move is unlikely to have the same impact as this year's earlier deals involving Matthew Stafford, Jared Goff and Carson Wentz, there will most surely be ripple effects. Here's a rundown of the likely winners and losers from Monday's transaction:

Darnold: He escapes The Big Apple after three turbulent seasons and gets resolution on his future after months of speculation regarding it. The Panthers should also provide a stable environment given coach Matt Rhule is under contract for six more seasons, and offensive coordinator Joe Brady, 31, is considered one of the game's bright, up-and-coming play callers.

Darnold's bank account: One reason it made sense for the Jets to move on from a quarterback once widely considered the best passing prospect in a 2018 draft that included Lamar Jackson, Josh Allen and Baker Mayfield was the opportunity to reset their financial clock at the position. As much as the deck had been stacked against Darnold, he'd done little to justify the long-term investment that New York would have been compelled to consider by rebuilding around him. However as Darnold heads to Charlotte, it's hard to imagine the Panthers won't pick up his fifth-year option – worth $18.9 million for the 2022 season – before this year's May 3 deadline. Darnold is also due to make $4.8 million this year, the most he'll earn since receiving his $20 million rookie signing bonus, and almost surely has at least the next two years to prove he's worth far more.

Darnold's supporting cast: He's upgrading from RB Frank Gore and WRs Jamison Crowder and Denzel Mims in New York to RB Christian McCaffrey, who had both 1,000 yards rushing and receiving in 2019, and WRs DJ Moore and Robby Anderson, who each eclipsed 1,000 yards through the air in 2020. Darnold and Anderson, teammates in New York in 2018 and 2019, should enjoy built-in chemistry – Anderson caught 102 balls and averaged 15 yards per catch during those two seasons despite the Jets' offensive limitations, which included six missed games by Darnold.

Non-QB draft prospect: Though the Panthers might still be in position to consider a quarterback with the eighth pick of this year's draft, it now seems more likely they'll add another premium player to build the foundation around Darnold. That means a left tackle to replace veteran free agent Russell Okung – namely Oregon's Penei Sewell or Northwestern's Rashawn Slater – could get pushed up the board. Carolina will also almost surely have the option to take wide receiver Ja'Marr Chase (LSU), Jaylen Waddle (Alabama), DeVonta Smith (Alabama) or Florida tight end Kyle Pitts, depending on how the board falls.

Joe Brady: After a record-setting, national championship season at LSU in 2019, he returned to the NFL in 2020 for his first crack at an OC job. It was hardly a rousing success, the Panthers finishing 21st overall and 24th in points scored. But McCaffrey missed 13 games, and veteran QB Teddy Bridgewater's limitations were apparent. Darnold is an underrated athlete – his 46-yard TD run against the Broncos in Week 4 was arguably the Jets' most memorable offensive highlight of the 2020 season – and should bring an added dimension to Brady's playbook, especially with McCaffrey also back.

NFC South rivals: Though Darnold's professional outlook is certainly rosier, there's no getting around the fact he'll be learning his third offense in four seasons amid the upheaval in his personal life. Barring an immediate breakthrough under Brady and Co., this team is unlikely to challenge the reigning Super Bowl champion Tampa Bay Buccaneers in the division and will probably struggle to overtake the Atlanta Falcons and New Orleans Saints even as those still-talented teams undergo major changes in 2021.

Scott Fitterer: The Darnold trade is the first significant move by the Panthers' rookie general manager. Though this was likely no better than Plan C or D as the franchise attempted to upgrade under center, this move is largely a low-risk, high-ceiling calculation – and may not preclude Fitterer from doubling down in the draft if Ohio State's Justin Fields, North Dakota State's Trey Lance or Alabama's Mac Jones drops to No. 8. And even if Darnold absolutely bombs Carolina into a 2-15 season, then the Panthers will likely find themselves in position to draft University of North Carolina star Sam Howell in 2022 and let Darnold walk without his fifth-year windfall (assuming he isn't injured).

Joe Douglas: The Jets GM is trying to get this team, which now owns the NFL's longest playoff drought (10 years), off the runway. Monday's trade means Douglas has a total of seven first- and second-round picks over the next two years to do just that.

Zach Wilson: To the degree there was any question the ascendant BYU quarterback – his dazzling ability to connect on off-platform throws have drawn (unrealistic) comparisons to Patrick Mahomes and Aaron Rodgers – would be the second pick in this month's draft, certainty now appears to have fully set in. Last year's No. 2 overall pick, Washington DE Chase Young, raked in a four-year, $34.6 million contract with a signing bonus just shy of $23 million.

Zach Wilson: Good luck, kid. We know you've got New York ties, but this pressure cooker of a town must be experienced to be appreciated. Now it's up to you to pull off what previous post-Joe Namath first-round quarterbacks (Darnold, Mark Sanchez, Chad Pennington, Ken O'Brien and Richard Todd) couldn't do: take the Jets to their first title since the 1968 team shocked the world in Super Bowl 3.

Joe Douglas: Though his predecessor, Mike Maccagnan, was the one who maneuvered to draft Darnold three years ago, it was Douglas who made a vow to the quarterback's parents in 2020 that their son would be taken care of. That didn't go so well for Douglas or Darnold, who suffered from a lack of play makers and previous coach Adam Gase's miserable tenure. It could also be argued the GM waited too long to pull the trigger on this trade, which occurred after well after Washington, the 49ers and Bears made moves to address their QB depth charts in alternate fashions.

Teddy Bridgewater: He's been universally adored at all four of his NFL stops, including a brief stay with the Jets in the summer of 2018, when he and Darnold were teammates. But after finally working his way back to a QB1 gig in Carolina four years after a horrific knee injury in Minnesota right before the 2016 season derailed Bridgewater's career, it seems unlikely he'll get another opportunity to call an NFL team his own. He's still owed about $39 million over the next two years and cutting him this year would cost the Panthers a $20 million cap hit. Assuming he remains in Charlotte for now, little doubt Bridgewater will be a model teammate and help Darnold as he did three years ago in New York. But tough break for a guy who's had more than his fair share.

Jets' history with USC players: Hardcore NYJ fans remember five-time Pro Bowl OT Marvin Powell with fondness … and nearly 35 years after his departure, he remains the only Trojans product who's truly worked out for Gang Green. Darnold now joins a list of players including Sanchez, Leonard Wiliams and Keyshawn Johnson – for some reason, the Jets also drafted USC guard Dave Cadigan eighth overall in 1988 – who briefly flashed before ultimately letting down a fan base accustomed to disappointment.

'Other' first-round QBs: While you can lock in Trevor Lawrence to the Jaguars and Wilson to the Jets atop the draft board, it now seems more probable that one of the other passing prospects – Fields, Lance and/or Jones – could tumble out of the top 10 with Carolina no longer a surefire landing spot at No. 8. And even if Fitterer does take one of them, he'd likely face the prospect of having to beat out Darnold and Bridgewater to play in 2021.

Falcons: If they were hoping to extract a king's ransom from the division rival Panthers for the draft's fourth overall pick … welp. And with Carolina seemingly out of this spring's QB market, less chance that teams like the Lions or Broncos get engaged in a bidding war to inflate that selection's value.

David Tepper: One of the offseason's prevailing narratives is that the third-year Panthers owner was determined to acquire a franchise-changing quarterback, including a failed bid to pry Stafford out of Detroit. Bringing former Clemson star Deshaun Watson back to the Carolinas likely would have the ideal outcome – before his legal issues made that move untenable – while Russell Wilson's no-trade clause would require his approval even if the Panthers had floated a sufficient package for him. And while Darnold has a prime opportunity to get his career on track, it's unlikely his arrival is going to galvanize Tepper's fan base or cause a run on No. 14 jerseys.