As we turn toward Week 6 of the 2019 NFL season, NFL.com’s network of reporters provides the hottest news and notes from across the league, including:

— One problem that continues to dog the Chiefs.

— What the Vikings have planned for Carson Wentz.

DENVER BRONCOS: Emphasis on pounding the rock. The Broncos knew leading up to their Week 5 trip to L.A. that they could close out the Chargers with a solid ground game if given the opportunity.

Denver did indeed use the running game to great effect in its 20-13 victory over the Bolts, rushing for a season-high 191 yards and eating six minutes of clock time to start the fourth quarter on a possession in which six of the team’s 11 plays were runs.

"We actually watched a clip, honestly, when the Rams were playing them and Todd Gurley ended up milking the clock and they just ran the ball down," running back Phillip Lindsay, who is averaging 4.7 yards per carry this season, said this week. "He was able to get it to like the whole game was over with seven minutes (remaining). He (offensive coordinator Rich Scangarello) showed that clip and said this is what we’re going to have to do if we’re going to win the game."

That Chargers-Rams game Scangarello showed his team was from Week 3 of last season. The Rams held the ball for the final 4:23 of the their 35-23 win, running nine plays (five straight runs from Gurley, two from Malcolm Brown and two Jared Goff kneeldowns) to end the game.

KANSAS CITY CHIEFS: D still dealing with running problem. The Kansas City Chiefs thought they had their run-defense issues solved. They used the offseason to hire a new defensive coordinator (Steve Spagnuolo) to install a new scheme (the 4-3 replaced the 3-4) that would utilize the strengths of several new players (most notably, defensive end Frank Clark and safety Tyrann Mathieu). However, the Chiefs ranked 30th in the NFL in rushing yards allowed heading into Week 6 after finishing 27th in that category last season.

Kansas City has allowed at least 180 rushing yards in each of its last three games, including last week’s 19-13 loss to Indianapolis, with the Colts putting up 180 exactly. When asked on Thursday if attitude is a factor in the Chiefs’ continued struggles, Spagnuolo said there are a variety of issues at play.

"I know everybody is looking for a specific reason," Spagnuolo said. "There is no specific reason. If there’s 20 plays in there that cause issues that are over 4- or 5-yard runs, there may be 20 different reasons. So, you just keep playing, and you do all the things you’re talking about. You make tackles and get to the football. That’s what you do."

LOS ANGELES RAMS: D-line staring down tough ground challenge from Niners. The Rams’ defensive linemen said the key to slowing down the 49ers’ NFL-best running game this Sunday will be to play fundamentally physical defense up front. Cliche-speak for sure, so I asked defensive tackle Michael Brockers to specify.

Since the 49ers use so many blocking angles, trapping and moving linemen, Rams players have to make sure not to get pushed backwards, or else they could get walled off, allowing offensive linemen to get to the second and third levels of the defense and spring running backs for explosive plays, according to Brockers. So establishing or re-setting the line of scrimmage into the 49ers’ backfield is Key No. 1.

Key No. 2 is landing initial contact on specific keys, such as the inside or outside of an offensive lineman’s pads, to prevent some of the movement or to throw the offensive lineman off balance, so he can’t get to where he needs to go.

The next step is to not lose discipline. Several defenders, not just on the Rams, said 49ers coach and play-caller Kyle Shanahan is a master at exploiting opposing teams’ intentions if he see players being too aggressive getting upfield or defensive backs trying to finesse certain receivers, for example.

"We need to focus on what we have to do to get a win," Brockers said.

With Gurley’s availability up in the air, Brown, Henderson getting ready. As for tailback Todd Gurley’s thigh injury, his status for Sunday’s game against the 49ers genuinely seems iffy. Coach Sean McVay said nobody, including Gurley, expected the contusion suffered last Thursday against Seattle to remain as sore and troublesome as it was a week later. Gurley said he and the medical staff are working to get better, and that there is time to figure out if he’ll be healthy enough to play.

McVay told me that Malcolm Brown and promising rookie Darrell Henderson will get reps in practice, and that regardless of Gurley’s status, Henderson, who has only one carry on the season, will be more involved in the offense moving forward.

Gurley is one of the most competitive people in the NFL, and his thigh would have to be seriously problematic for him not to try to play Sunday. Multiple players told me the offensive plan is to be more balanced, since the run-pass ratio has heavily skewed to the pass over the last two games, both losses. However, it should be noted that they’ve approached each week planning to run, but were forced to throw because of circumstance (falling behind 21-0 to Tampa Bay) and defensive strategies.

MINNESOTA VIKINGS: Focus on slowing Wentz from the start. Carson Wentz hasn’t exactly been Mr. First Quarter this season, posting a 54.4 passer rating in the first 15 minutes and a 102.3 rating thereafter.

So how does the Vikings defense extend that trend and get after the Philadelphia Eagles quarterback early Sunday at U.S. Bank Stadium?

"Like we do any other week," safety Anthony Harris told me Thursday. "Try to give him different looks pre-snap, see if we can make his job a little bit more difficult as far as knowing what coverage we’re in and make him figure it out, and then try to keep tight coverage, make him throw in some tight windows and then try to go hand-in-hand with the rush as well to try to be effective. Pressuring him, get into his feet, try to make him uneasy in the pocket and then making those windows tight to throw in."

It worked when the teams met in Week 5 last season. The Eagles’ first two drives netted a combined minus-4 yards, and both of Wentz’s touchdown passes came in the fourth quarter of a 23-21 Vikings win.

NEW YORK JETS: A new day with Darnold? As Sam Darnold returns from mononucleosis Sunday against Dallas, the Jets (0-4) hope to become competent and competitive. It’s been a long four weeks (three losses and a bye week) without their starting quarterback.

The locker room is elated to have Darnold back, even as running back Le’Veon Bell cautioned: "We can’t expect Sam to just go out there and be Superman."

Darnold’s return almost has to bring improvement: Over three games with Trevor Siemian and Luke Falk at quarterback, the Jets were 5 of 40 on third-down attempts (worst in the league during that span). They have one passing touchdown, by Darnold in Week 1, and just 454 passing yards — total. And they gave up 10 sacks to the Eagles on Sunday.

Coach Adam Gase, also the offensive play-caller, referred to Darnold on Wednesday as "an eraser-type player, where it can be the worst call ever and he makes it work." Gase also welcomes the return of the entire playbook, except for any plays Darnold decides he doesn’t like.

"It’s one of those things where, if I make a mistake, he can hide it," Gase said.

After Dallas, the Jets play New England on a Monday night. The schedule isn’t getting easier, but life with Darnold gives the Jets hope.

An unusual point differential. The Jets’ defense and special teams have outscored the Jets’ offense, 25-14, this season. We’re going to let that stand for itself, other than to thank NFL Research(ers) for the fantastic job they do.

Jets still waiting for Mosley to return, luck to even out. Perhaps the entire Jets organization somehow walked under a ladder AND let black cats — plural — cross their path. It’s been quite a first quarter of the season, led by Darnold’s battle with mono, of course. The Jets are the only team in the league to have started at least three quarterbacks this season.

But that’s not all. Chief among their other challenges is the groin injury sustained by linebacker C.J. Mosley in Week 1, which is expected to continue to keep him out this Sunday. In five years in Baltimore, Mosley played an average of 93 percent of defensive snaps; in three seasons, he played 99 percent. With the Jets, he hasn’t been able to get back on the field with an injury that Gase acknowledged was "more severe" than Mosley or the team initially thought.

Then there’s Le’Veon Bell, whose productivity is directly related to Darnold’s absence. Bell is one of 13 players with at least 90 touches in 2019. His yards-per-touch mark of 3.8 is the lowest among all 13 players.

And tight end Chris Herndon, a favorite target of Darnold last year, was due to come back from his four-game suspension for violating the league’s substance-abuse policy. But he pulled his hamstring running routes on his own on Oct. 4 and isn’t expected to play against the Cowboys.

Gase was asked for his reaction to the Herndon injury. "I don’t think that I can say," he said. And then he laughed, as did the reporters in the room. 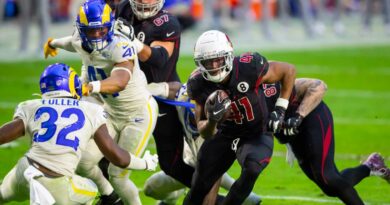 NFL playoff clinching scenarios for Week 17: NFC’s No. 1 seed, five other berths up for grabs in regular-season’s final weekend

A dog caught an 83-yard frisbee pass at an AAF game, and yeah, it was awesome