After one of the more impressive true freshman campaigns in recent memory, North Carolina quarterback Sam Howell and the Tar Heels have not quite lived up to the team's heightened expectations in 2020.

Howell's numbers, however, remained solid. The quarterback entered Week 11 ranked seventh in the country in passing yards and tied for ninth in touchdown passes. And on Saturday in Chapel Hill, N.C., Howell showed why he remains one of college football's more exciting players and an intriguing prospect by going off for seven total touchdowns as North Carolina pulled off a 59-53 comeback victory over Wake Forest.

Howell threw for a career-high 550 yards and six touchdowns while completing 32 of 45 passes. His touchdown on the ground — more than replay-worthy — came from 20 yards out with 4:11 on the clock and gave the Tar Heels their first lead since early in the second quarter.

Wake Forest took a three-touchdown lead at 45-21 with seven minutes remaining in the third quarter, when Sam Hartman — who threw for 429 yards and four touchdown passes — found Donavon Greene for an 18-yard score.

Howell then led North Carolina on five consecutive touchdown drives, and the Tar Heels outscored the Demon Deacons 28-8 in the fourth quarter.

After losing two of three games, the North Carolina offense has found its groove, scoring 113 points over its last two contests. 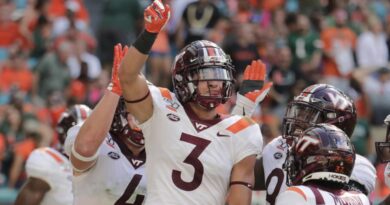 Caleb Farley: 'NFL doctors confirmed I would be ready for the season' after medical checkup