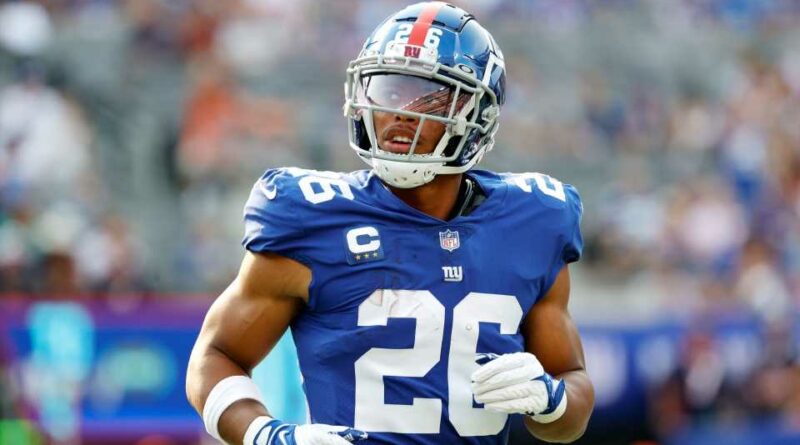 The Giants could find themselves playing in prime time without their star running back.

Saquon Barkley is listed as questionable with a knee injury on New York’s injury report ahead of its “Thursday Night Football” clash with the Washington Football Team. According to the team’s page, he was a limited participant at practice during the week.

Barkley returned for Week 1 against the Broncos after having torn his ACL in 2020. He rushed 10 times for 26 yards while hauling in one of three targets for one yard. The Giants lost their season opener 27-13.

Barkley was drafted second overall in 2018 and shined his first two seasons in the NFL. In his first campaign, he rushed 261 times for 1,307 yards with 11 touchdowns, while hauling in 91 passes for 721 yards and four more scores. The campaign netted him the Pepsi Rookie of the Year and NFL Offensive Rookie of the Year honors.

He followed that up with 217 rushes, 1,003 rushing yards and six touchdowns on the ground with 52 catches for 438 yards and two touchdowns in 2019. During that season, however, he suffered an ankle injury that forced him to miss three weeks of action.

Then in 2020, in the second game of the season against the Bears, he tore his ACL and was forced to miss the rest of the campaign.

Without Barkley in the lineup, the Giants’ offense will be expected to take a massive hit. Quarterback Daniel Jones struggled in the season opener as he completed just 22 of 37 passes for 267 yards with one touchdown and a fumble. He was the team’s leading rusher with 27 yards on six carries and a touchdown.

If Barkley is unable to play, expect to see Devontae Booker picking up the majority of the handoffs for the team. Booker took four carries for seven yards on Sunday against the Broncos and caught one pass for one yard. Last year with the Raiders, he rushed 93 times for 423 yards and scored three touchdowns on the ground.

Fantasy QB Rankings Week 3: Who to start, sit at quarterback in fantasy football